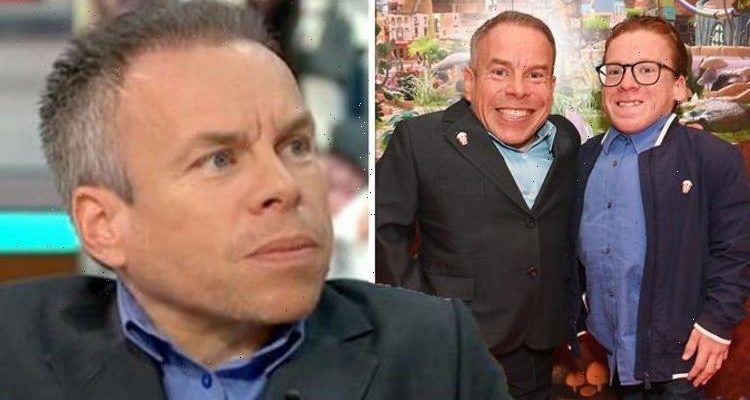 Warwick Davis, 51, leads the all-star cast of children’s show Moley, appearing alongside actors like Dame Julie Walters and Charles Dance. However, in an exclusive chat with Express.co.uk, the actor shared how his son was one of his favourite co-stars when they worked together on the series.

Warwick is known for his stellar Hollywood career in films like Willow, Harry Potter and Star Wars.

However, fans of the star may not realise his son Harrison, 18, has appeared in a lot of his projects with him.

The pair recently reunited on screen again for the new series of Warwick’s children’s show.

They star in the animated series Moley together, which tells the magical story of a community of moles living beneath the earth.

Harrison played the part of Cheese, who is described as Moley’s biggest fan.

Speaking about working with him, Warwick said: “It was terrific.

“He didn’t start out wanting to be an actor, it was one of those things which sort of landed in his lap really.

“He was also in Harry Potter and he worked with me on Episode IX of Star Wars.

“For Moley this came about because I was doing a recording at home.”

Warwick explained how he got Harrison to come in and record a few lines of a character when he came home from school one day.

However, he actually ended up bringing tears to the eyes of the crew with his emotional performance.

“The director and the producer were on Zoom watching the recording with me,” Warwick continued.

“So Harrison sat there and did a few lines and they loved what he did.

“He plays the character of Cheese who is Moley’s biggest fan and wants to be like Moley.

“And he did such a lot of emotion, he actually brought tears to the director’s eyes when he was recording.”

Warwick shares two children with his wife Samantha and their daughter Annabelle, 24, is also an actress.

Moley has returned to screens on Boomerang with 52 new episodes, with stars like Gemma Arterton and Stanley Tucci among the cast.

The show initially started as just a Christmas special, but after its success was brought back for a full series.

Speaking about playing the role, Warwick admitted: “It’s a lovely character, although I do wish now I’ve chosen a slightly different voice.

“When I do Moley, it’s quite a high register for me to reach the voice and so it’s quite exhausting when you actually perform us aloud recording of this character.”