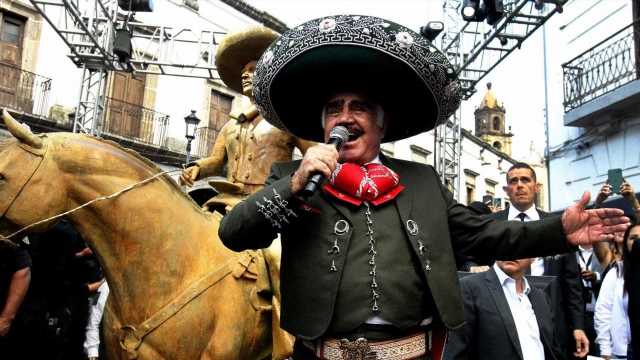 Vicente Fernández is on the road to recovery.

The 81-year-old Mexican icon was hospitalized on Aug. 8 after suffering a severe fall at his ranch, Los Tres Potrillos, located just outside Guadalajara, Jalisco, Mexico. According to his family, Vicente was in “serious but stable” condition and on a ventilator from the results of trauma to his cervical spine.

The El Rey de la Música Ranchera is a Mexican multi-GRAMMY-winning cultural icon, recording more than 50 albums and starring in over 30 films. As his family continues to update fans on his well-being, here is everything we know about his recent health struggles.

On Aug. 8, Vicente suffered a fall that caused trauma to his cervical spine. His family and medical team released a statement the following day on his social media sharing the news of his fall and health status. The family did not go into specifics of how he fell.

“Don Vicente Fernández’s current state is undoubtedly serious but stable after he suffered a fall that caused trauma to his cervical spine,” the statement read in part, in Spanish. “At the moment he is post-operation and finds himself with ventilatory assistance and critical patient care in the intensive care unit.”

HOW BADLY WAS HE INJURED?

According to Dr. Francisco López, a neurosurgeon on Vicente’s medical team, the injury to his cervical spine caused a loss of movement in all four limbs, forcing him to undergo emergency surgery, per AZ Central.

After the surgery, Vicente started to have respiratory issues and an acute infection was reportedly found that affected his peripheral nerves, “an illness that is also related to loss of strength and generalized weakness, which has an atypical and aggressive presentation,” López shared.

At the time, the medical team was working to regain function in his limbs and improve his respiratory system.

On Aug. 11, the Fernández family shared the first update, writing in part, in Spanish, “He continues to be dependent on ventilatory support due to poor respiratory effort. As for his brain functions, they are comprehensive. We expect a progressive recovery of mobilization,” adding that Vicente was minimally sedated.

By Aug. 13, Vicente’s health had improved. His family released a new statement, sharing that while he was still dependent on a ventilator, he was free from a lung infection. The statement also shared that his cardiovascular health was stable, with slight movement in his limbs.

Amid news of Vicente’s hospitalization, his son, acclaimed singer Alejandro Fernández, took to Instagram on Aug. 9 to post a photo of the two onstage.

He wrote in Spanish, “I love you dad.”

In a follow-up post, Alejandro wrote, “You always have to have faith that things will work out because faith moves mountains. Chin up, boss. You always come out of difficult moments and this does not have to be the exception. I love you and we want to see you back at the ranch.
You are our example of strength and show up to never give up!”

Additionally, Alejandro’s son, Alex Fernández Jr., also shared a photo of him and his grandfather, writing, “You are a warrior, tata. I love you.”

Alex also announced on Aug. 17 that he and his fiancee, Alexia, decided to postpone their religious wedding until his grandfather recovered and was able to celebrate with them.

Vicente Fernández Jr., on his end, thanked everyone for their well wishes and prayers, as well as posted a photo of him and his father together.