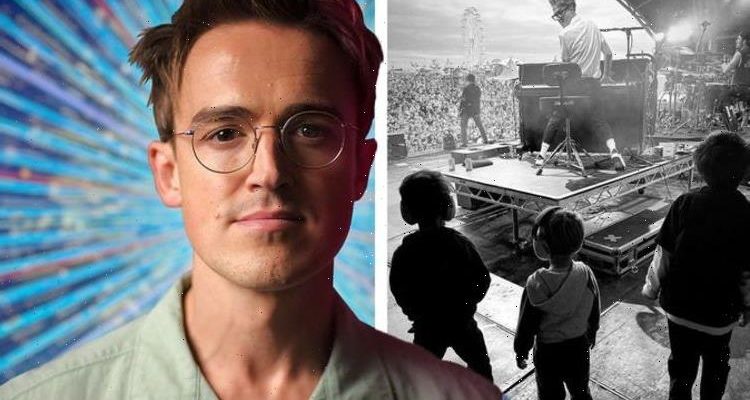 Tom Fletcher, 36, spoke to Express.co.uk about how a tearful moment with his son led to him deciding to take part in Strictly Come Dancing 2021. The McFly hitmaker was the first celebrity announced for this year’s line up.

He said: “My eldest son Buzz, over the last couple of years has been such a huge fan of Strictly.

“He has been really emotionally invested so when Chris Ramsey was in it a couple of years ago, he cried his eyes out when he got voted out.

“Seeing him get really into it and then being asked if I would do it, I just thought my son would love that.

Chris Ramsey danced his way to the semi-finals in 2019, with the comedian finishing in fourth place.

Tom has three sons with wife Giovanna, and have been married since 2012.

When asked what his son would be most excited for when he performs, Tom could not just say one thing.

He said: “He is really looking to musicals week and movies week if I get that far.

“Just whatever movie he is into most at the time he wants me to dance to.

“He does come up with loads of suggestions which is really sweet.”

Tom is hoping to impress the judges as much as his bandmate, Harry Judd, did 10 years ago.

His co-star won the show in 2011 with Alioni Vilani.

In 2010, Harry won a special Strictly Come Dancing for Children in Need.

To add to his Strictly winnings, he also took victory in the 2015 Christmas Special with Joanne Clifton.

Tom said: “I think secretly somewhere deep down I’ve wanted to do it since my bandmate Harry did it ten years ago.

“I feel like I had some secret desire to do it since then.

“But you know life gets in the way and now it just feels right, felt like it was time.”

Strictly Come Dancing returns to our screens on Saturday.