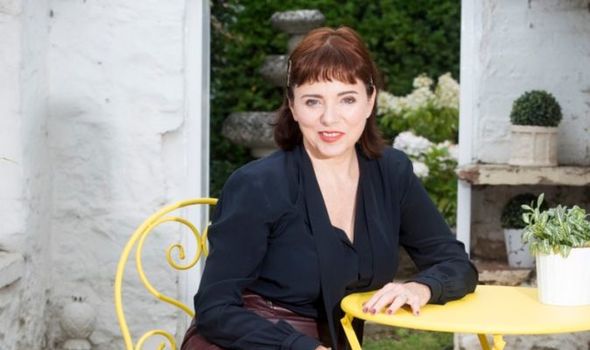 They were wrong on many levels – apart from anything, Liza Minnelli has no children – but they were correct that their new neighbour, in fact the daughter of Dame Joan Collins and her second husband, singer-songwriter Anthony Newley, was born of Hollywood royalty.

“Slowly the word got round but we’ve moved past that now and got back to real life,” says the novelist.

Tara is laughing as she tells the story, but doesn’t it annoy her, at the age of 56, to still be known as, “The daughter of…”? “It’s been a really interesting past.

I think a lot of time you get opportunities but unless you can back them up they don’t come again,” says Tara.

“It’s incredible to be their daughter – they were such creative people but I had to go off and find out who Tara was, what she was going to do.

“Being the daughter of Joan Collins and Anthony Newley could be daunting but I had to find out who I am. And every day it’s about being the best thing you can ever be, and to do and feel all these experiences have enriched me as a person.”

“Looking in from the outside, the Liza Minnelli comparison might appear reasonable. Famously workaholics, Tara’s parents were both absent for long stretches of her childhood.

Newley, who died in 1999, was as big as Frank Sinatra when he moved to Las Vegas in the 1960s. He wrote Feeling Good, the Nina Simone hit, co-composed the title song of Goldfinger and received an Oscar nomination for his film score for Willy Wonka & the Chocolate Factory. 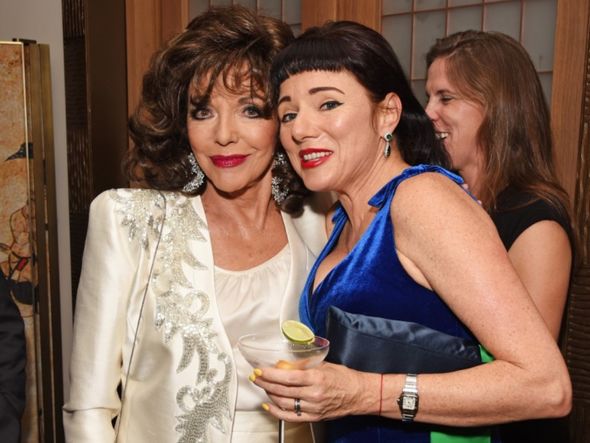 Also a Londoner, Dame Joan barely needs any introduction. A successful young actress, she was catapulted to the stardom that still surrounds her during Tara’s 1970s childhood, when she appeared in the film of her sister Jackie’s racy novel The Stud. The sequel The Bitch was a huge hit too.

In 1981 along came Dynasty, then a struggling soap opera. As Alexis Colby, Collins turned it into an overnightTV sensation.All the while,Tara and her younger brother Sacha were cared for by nannies.

One, Sue de Long, took them on holiday to her family home in Westonsuper-Mare. It sparked a lifelong love for the area, which is why Tara relocated to the West Country 14 years ago and named her 16-year-old son, by property developer Richard Skeates (Sue’s nephew), Weston.

Tara has just published her first novel, Radio Honey, which tells the story of feisty DJ Cassandra Bates and the sexual tensions at an all-female radio station. The fictional Cass is raised by her father after her “flighty” mother walks out.

Tara, who was born in New York, had that same itinerant showbiz life familiar to so many Hollywood kids and split her time between her parents’ luxury homes in Mayfair, Beverly Hills and the South of France after they divorced in 1970.

Indeed, it is well reported that Tara was so infuriated by her mother’s extended absences that when she was 14, she decamped to America to live with her dad.

“Like most mothers today, she couldn’t afford to stay at home cooking. She had to work, as she was the breadwinner,” Tara has said in defence of her mother who was by then married to her third husband, record producer Ron Kass, who frittered away vast amounts of money on drugs. 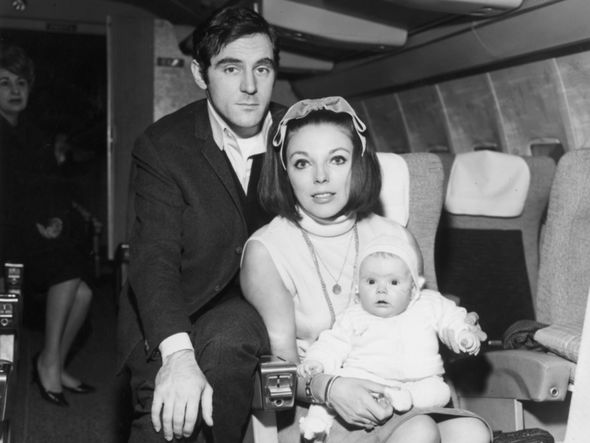 If she ever felt any rancour about her peripatetic childhood, there is no sign of it today. In fact Tara is so incredibly laid-back it is hard to reconcile her jet-set childhood with the simple life in Somerset she so enjoys with husband, Nick Arkle, their two chickens, cat and rabbit.

“We are the most boring people ever,” Tara says laughing.

Tara’s back hard to a jet-set “There are some lovely friends down the road who have the most amazing dinner parties and we are always the first to leave.”

with her life in Somerset’ ” Although they have been married for four years now – stepdad Percy Gibson, her mother’s fifth husband, a year younger than Tara, gave her away – the couple act like newlyweds.

They beaver away in their respective studies – Nick, 61, writes young adult fiction under his middle name Gilador and has published the PI Lightfoot trilogy, which he and Tara are trying to get made into films.

“The perfect night for us is a home-cooked meal in front of the fire watching Netflix or Amazon,” says Tara, who writes under her married name,Arkle. Wedding photos of the happy day in 2016 show the mother of the bride, resplendent in a floral dress with hat and veil, and Percy wearing a Gibson tartan kilt.

He walked Tara down the aisle to her father’s hit, Feeling Good.

She has a daughter, Miel, now 21, from a short marriage to the French composer Michel Adam, but one gets the impression she counts her current marriage as the one and only.

Her match-making best friend introduced her to Nick, a childless divorcé from the next village. 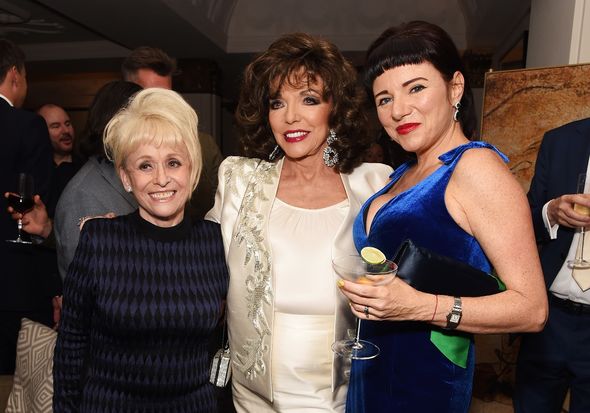 “Every day I feel like the most blessed person,” Tara says. “I have found my soulmate, I have two beautiful children, a lovely house, we have got enough money to write and live and eat. When I think how much pain and suffering there is in the world, I feel guilty in my Garden of Eden. I do what I can in my own charitable way but it never really feels like enough.”

Tara has worked with victims of domestic abuse and was joined by her mum on the annual United Nations Elimination of Violence againstWomen march in Bristol.This year it will be a virtual event but Tara says we need to keep talking about inequality.

She is delighted that Radio Honey, a manuscript she wrote years ago, is finally having its day. “I have come to believe in my life that everything has its time and it’s not the time you think it should be. Nowadays we have the #MeToo movement, we have Phoebe Waller Bridge (the creator of hit TV series Fleabag), we have women’s voices which are being heard and represented and respected, so perhaps this was the time for Radio Honey to find its voice.

“I worked in an all-female radio station. Sometimes women can be the worst advocates of other women which is really sad when we’ve got half the world against us and feminism is still a dirty word.”

Tara is the first to admit that she wouldn’t be where she is today if she hadn’t had the parental leg up: “Obviously I appreciate that if I wasn’t the daughter of a dynasty that I may not be in this privileged position. It would be wrong to be ungrateful. I have people from all over the world who tell me still how much they love my father.” When asked about Sacha, a London-based artist who published a 2017 memoir “Unaccompanied Minor” about what he called their dysfunctional parents,Tara says simply: “I am lucky I have my brother to discuss them with.”

If there is anyone less suited to the title “Mum”, it must be Dame Joan but that’s how her daughter affectionately refers to her, as if she were some sweet little old lady rather the age-defying tour de force she continues to be, even in her 87th year. “I haven’t seen mum since before lockdown,” says Tara. “She was in London and then went to France [Dame Joan has an opulent home on the Cote D’Azur] because that’s her yearly routine. I am looking forward to seeing her, in a [Covid] six-formation, next month.We speak every week.”

Tara attributes her inner serenity to a decade of studying Kabbalah, the branch of Jewish mysticism beloved of Madonna and Britney Spears among other celebrities.

“I spent years in therapy, it didn’t help me,” says Tara, “but when I started studying Kabbalah it stopped me being a victim. My mum says, ‘You’ve completely changed, you’ve become a much calmer, more centred person’.”

Tara believes she has “lived” before and that we continue to exist in some way after death, in echoes of her father’s Buddhism.

“I remember him taking me into the garden when I was 12 to meditate looking at a rose. He tapped my arm and said, ‘That moment is gone for ever’, to help me appreciate time and consciousness. He was an incredible man. The physical absence is very tough. I still talk to him and feel him around. He is buried in a memorial wall in a cemetery in Florida where he’d gone seeking cancer treatment.The last time I went to America was shortly before he died. I have never been to the wall.”

After Tara’s relationship with Weston’s dad broke down in 2003, she was with roofer Paul Beck, 13 years her junior, for two years, then alone for six. “I got to a stage where I thought, ‘I’m not going to get into any more relationships right now’.

“I think I was a bit lost, I didn’t really understand why certain things kept happening and I was ready and open and willing to look at myself long and hard and make whatever changes I needed to create a better world for myself and for my children.

“So for six years it was just the three of us and being a single mum, as many of your readers will know, is hard, and you just get on with it – you don’t have a choice.”

Tara seems genuinely at peace and, besides, she has no time for regrets. “There’s no point – it’s a waste of energy,” she says. “It’s been a long road but I’m in the place I always wanted to be.”

Radio Honey by Tara Arkle is published by Black Pawn Press priced £13.98 and out now