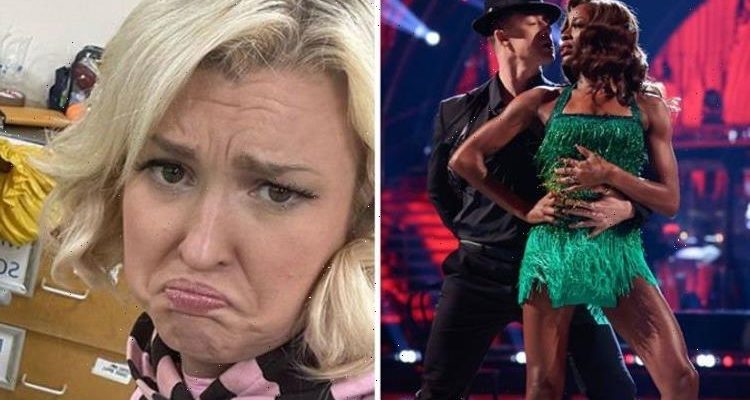 Sara Davies, 37, was partnered with Aljaž Škorjanec, 31, on Strictly Come Dancing 2021. The Dragon’s Den star took to Instagram and shared her thoughts as show finalists AJ Odudu, 33, and Kai Widdrington, 26, were forced to drop out of the competition.

It comes after AJ suffered a torn ligament in her ankle and has been unable to stand up without being supported by crutches.

Taking to social media yesterday, it was announced that the presenter and her dance partner will no longer be in the final.

The Dragon’s Den, who was the seventh celebrity to be voted out of the competition, has said that her show colleague had been “robbed” of her place in the final.

Taking to Instagram, Sara shared a candid photo alongside an injured AJ.

In view of her 162,000 followers, the BBC star penned: “Can I just say how absolutely distraught I am for this one.

“She’s been absolutely robbed of a place in the Strictly final and I am totally devastated for her.

“But she’s got her head held high and still out there supporting the other finalists in the way that only AJ could and she’s flipping amazing! Love her to bits!”

The Strictly star was soon inundated with comments, as fans also shared their despair.

Helen Skelton replied with a series of heart emojis.

Cathy Lawler wrote: “So sorry for AJ & Kai. The final will not be the same without them but they are both winners and AJ should be so proud of what she has achieved. She has been incredible and wowed us every week with her amazing performances truly outstanding!”

Paige Louise added: “So sad to see her go.”

This year’s Strictly contestants are set to return to the dancefloor for the show final which airs tonight.

The pair were set to compete against John Whaite and Rose Ayling-Ellis but had to pull out due to an injury.

As they spoke about missing out on the final show, Kai broke down as he comforted his celebrity partner.

Speaking in a video message to AJ, her mum Florence said: “AJ is full of life, she is a wonderful and beautiful daughter.”

Her brother added: “AJ was always big, bold and brass, always the centre of attention.”

Strictly Come Dancing: The Final airs tonight on BBC One at 7pm.