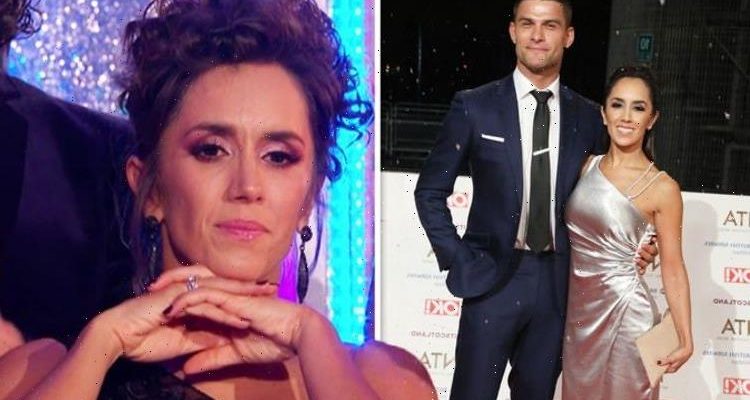 Janette Manrara apologises for not being able to sign photos

Strictly Come Dancing stars Janette Manrara and her husband Aljaz Skorjanec were forced to “pull the plug” on their dance tour due to Covid. The It Takes Two presenter has since addressed the return of their show Remembering The Oscars.

The 38-year-old is currently gearing up to host the Strictly Live! arena tour which kicked off on Thursday.

The professional dancer will later take to the stage alongside her other half Aljaz, 31, for the couple’s Remembering The Oscars UK tour which starts in March.

The BBC favourite admitted that she has her “fingers crossed” that the show will still go ahead.

Her comments come after she was forced to postpone their show last year.

The on-screen performer admitted she was left “devastated” after the couple’s plans were placed on hold.

Speaking about the Strictly duo’s tour, Janette said: “Five years ago, we did a show called Remembering Fred.

“It was the first time Aljaz and I toured the UK and realised people like to watch us dance!”

She went on: “Then we did Remembering The Movies and realised, the best thing about film is the Oscars. It’s our best show to date.

“But then Covid happened.”

But to Janette’s delight, she will be back on theatre stages across the UK alongside her beau.

“We had to pull the plug before we went into theatres, it was devastating,” she continued to Best magazine.

The BBC star said she is hopeful that they will be able to bring their “show to life” when the tour returns in March.

She penned: “I cannot believe this video was two years ago now.

“We were so excited to share @rememberingtour with everyone, and then the world was hit with a pandemic.

“No one expected it to take this long, but we are FINALLY getting this beautiful show out there for all to see!!”

She added: “It’s been long enough! Make sure to book your tickets and come see us! (link in Bio) We could not be more EXCITED!! Who’s coming?!? #RememberingTheOscars.”

Janette and her other half first met on a worldwide tour of the Broadway show, Burn The Floor in 2009.

After years of dancing on international stages, the pair were cast in Strictly in 2013.

Janette has since left the dancefloor and currently fronts the BBC spin-off show It Takes Two.

Meanwhile, the Strictly duo tied the knot in 2017 and celebrated in style with three lavish ceremonies.

One took place in London, another in Janette’s home of Miami, and the third in Aljaz’s home in Slovenia.