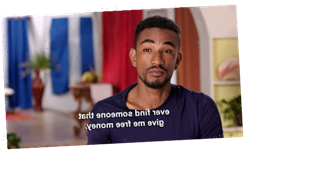 Even though half of the storylines were already wrapped up, the 90 Day Fiance Season 8 finale was a doozy.

One particularly jaw-dropping moment came at the very end of Stephanie’s romance with Harris.

She was done with Ryan for good and eager to move on with Harris after some due diligence.

But what Harris had to say about Stephanie was anything but romantic. …

Stephanie Davison has been burned before.

Her relationship with Ryan Carr ended in disaster and trauma.

So upon her return home to Michigan, she burned what would have been his visa application.

After saying good riddance to old rubbish, Stephanie broke the news to her cat, Cooper.

He had never met Ryan. Stephanie had Cooper give a “kiss” to Harris’ photo, now taped to her fridge.

“You know, I’m a little guarded right now when it comes to Harris,” Stephanie admitted to the camera.

She explained: “just because I know for a fact that Harris is living with Emma, the person who he has three children with.”

Stephanie continued: “But he has been telling me, ‘We are living in the same home, co-parenting those children,'”

Stephanie then shared: “Believe it or not, she texts me and she actually says, she gives us her blessing.”

“She wants Harris and I to be together,” she added.

And when Stephanie asked Harris to let her speak to Emma directly, Harris was happy to oblige.

The two spoke directly over Facetime, where Stephanie wanted to hear Emma confirm that she and Harris are not a couple.

“Well, you know, sometimes in life you think that that is your partner, but it’s better off as friends and I find it better that Harris and I are not together,” Emma confirmed.

She explained: “We communicate more as friends and we are more happy together like that.”

Emma also expressed confidence that Harris would not forget about his children back home.

“I love Harris,” Stephanie declared to the cameras. “He is definitely the man that I’ve been looking for.”

“So, Harris and I are going to apply for the K-1 visa,” she shared. “And I think that he can be my happily ever after.”

We don’t know that Harris didn’t make a similar mushy declaration. If he did, it must have been edited it.

All that viewers saw and heard was, after Stephanie’s lovestruck description, Harris’ very pragmatic description of what Stephanie can do for him.

Harris told the camera: “I have a lot of big dreams.”

“All the time, first thing is my family,” Harris emphasized.

He didn’t hold back when it came to listing how many people this included.

Harris expressed his hopes to be able to help and support “my kids, my mom, my dad.”

“I can make better life for them,” Harris announced.

Many people have come to the United States over the years in the hopes of improving their family’s lives.

However, very few of them have someone like Stephanie involved in their “American dream.”

“I love her so much,” Harris gushed, “and I will always take care of her.”

“I never ever in my life, find someone that give me free money,” Harris praised of Stephanie.

“So I feel special that I meet someone like Stephanie,” he expressed.

“If I marry Stephanie and I have to move out from Belize, I will always think about my kids,” Harris vowed.

Of his children, Harris affirmed: “I love them so much.”

“They’re gonna be hurt, I know,” he acknowledged. “Such is life.”

“But I want to make a better life for my kids and the family, man,” Harris stated.

“There’s only one time in a history you get a good break like that,” Harris observed.

Despite his intention of not missing his chance, cameras also recorded him kissing Emma.

That was a wild ride from start to finish. We would love to know how Stephanie felt after seeing that.