The Israel Folau thing? The first part of it is fairly simple.

This time a year ago he made a post on social media vilifying gays which engulfed his employers at Rugby Australia, his Wallaby and Waratah teammates, and the entire game over three weeks of misery. 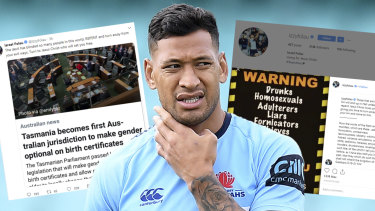 Despite that, Rugby Australia in its wisdom – or perhaps, lack thereof – decided to contract him again for four years on a salary of a $1 million a year. It boiled down to: “We want you to take bombs, tackle, score tries and … one more thing. We want you to promise not to put another post up like the last one, engulfing us all in precisely the same agony as last time.”

Despite that, a month ago, Folau put up a post on social media which put Australian rugby through precisely the same agony. The inquiry of the past few days, presided over by three heavyweight legal-beagles – and addressed by the legal hawks of both Folau and Rugby Australia – has been just the first of perhaps two or three rounds of legal testing as to whether Folau did legally commit to avoid damaging posts; whether he breached that legal commitment; and whether it warrants Rugby Australia tearing up his contract.

The fact that Rugby Australia clearly won the first round is encouraging. It gives a strong indication of how the next legal rounds might go, but it is not definitive.

That is the situation as it stands and, of course, against that there have been many claims made by those who support Folau despite it all. Let’s have a quick look at the basic claims.

This was a victory for media bullies like yours truly, who all got together and said “Let’s get Israel.” Uh, no. As I said on Twitter to one who made this very charge, it was actually rugby and wider communities saying, “No more bullying of gays, we're over it. And if you insist on doing it, you can’t do it while wearing our jersey and being paid a million bucks a year.” For each time Folau posted, the ones who led the charge were the public, who exploded on talkback, on social media and thundering letters to the editor well before any of us in the media wrote a word.

Critics are howling this is a problem specific to rugby. Uh, no again. How many of you, reading this, are free in your own workplaces to put up social media posts like Folau and still be employed? Across our brown and pleasant land, millions of employees get it, comport themselves accordingly, and we’re a stronger and more inclusive country because of it.

This is all about freedom of speech. Umm, no again. No-one is dragging Folau off to the Gulag, for starters, and as I have stated many times, while he has broad freedom of speech, he has no freedom from consequences. Secondly, those who are howling loudest about freedom of speech for Israel Folau – Alan Jones et al – are precisely those who howled loudest against the likes of Yassmin Abdel-Magied – who tweeted that on Anzac Day 2017 we should also reflect on Manus Island detainees- and called for her to be banished. Ditto, when SBS presenter Scott McIntyre tweeted his own views about the Anzacs and those who commemorated Anzac Day, there was not a single peep out of them about his rights to freedom of speech. They wanted him sacked from SBS, and he was.

This is an attack on the freedom of religion in general, and Christianity in particular. This line of attack is again led by Jones and you’ll think I am making this up, but I’m not. “He’s in trouble for uttering four of the most immortal words in civilisation’s history,” Jones said on Sky on Tuesday, “I am a Christian.” Complete and utter bollocks. For starters, heaps of wonderful Christian leaders such as Father Rod Bower have come forward entirely disassociating themselves and their religion from Folau. Within rugby ranks, Wallaby flanker David Pocock, who led the charge against homophobia the code, is a devout Christian. Willie Ofahengaue, the first Tongan to play for the Wallabies, is a devout Christian, and both of our Wallaby World Cup winning captains in Nick Farr-Jones and John Eales answer the same description. There are dozens and dozens more. The idea that Rugby Australia was out to get Christians, right after signing Folau up again is so absurd there are no words.

The Diggers would be turning over in their graves. I am not making this up, I tell you. Alan Jones, AGAIN is actually pushing this line.

“The Australia that our Anzacs fought for seems to be disappearing before our very eyes,” he told the Daily Telegraph. “This is not the Australia our veterans fought for.”

Yes, Alan, because right before they went over the top at Gallipoli, Fromelles, Pozieres, The Nek and Villers-Bretonneux, the Sergeant said, as I have documented, “Let’s do this, so Australia can be made safe for homophobic gibberish! We are going to give our lives, so that in the future it will still be safe for one group of Australians to be told that by being born gay, they are so wicked, they will reside for eternity in hell.” Alan? This is so ludicrous and so disrespectful to their memory, it is barely worth dignifying with a response, but again, you leave me with no choice.

This is much bigger than Folau, and will go long. This is the only contention with merit. Some legal experts posit that if a homophobic slur is a religiously based homophobic slur then higher courts will protect it under freedom of religion legislation. It would amaze me if that proves to the case. Across the land, it would suddenly be open season on gays again. But I suspect Folau will now be financed by conservative organisations to test that contention.

In short, rugby has seen a few cluster-rucks in its time, but this is a rolled-gold cluster-ruck any way you want to cut it.