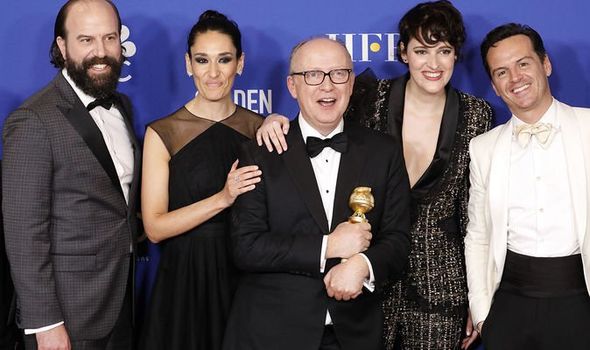 But after going on to play the Bond villain Max Denbigh opposite Daniel Craig in Spectre, Scott said that he was tired of playing the bad guy. So he was delighted when he landed the role of the Hot Priest in Phoebe Waller-Bridge’s hit TV series.

Speaking in this month’s edition of GQ magazine, the Irishman explained: “After Sherlock, there were a lot of ‘sub-Moriarty’ roles that were offered to me.

“I played a villain in one of the Bond films – I was like, ‘Yeah, I want to be in the Bond film!’ – and that was a really good experience.

“But I think after a while you have to go, ‘No, I don’t want to do that any more.’ I think romantic comedy is very underrated; I was always looking for something that explored romantic love in a really intelligent and human way and I felt, when I first started talking to Phoebe [Waller-Bridge] about it, that this was ideal.”

He also won further acclaim playing the title role of Hamlet in a 2017 production first staged at the Almeida Theatre, for which he was nominated for the Laurence Olivier Award for Best Actor.

But he said he did not agree with the snobbery within the acting profession directed at those who enjoy TV shows more than the theatre.

He explained: “I think it’s been unfairly reported that fans of TV shows make noise in the theatre and behave like animals.

“That’s not my experience at all.

And if people are a little bit more vocal or show their enthusiasm in a slightly different way than polite, reserved silence, then I don’t see the problem with that.