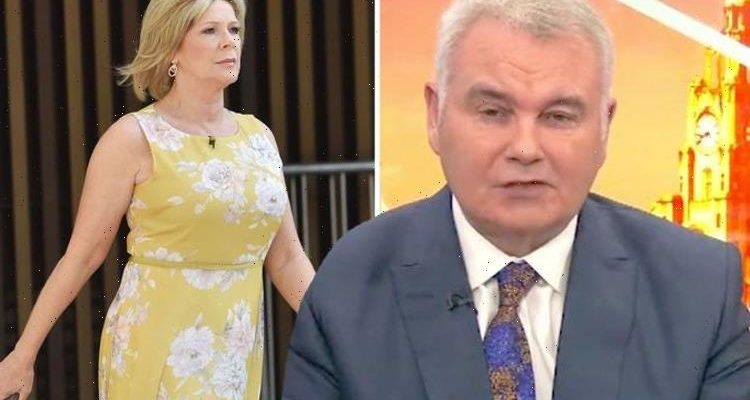 Eamonn Holmes put forward the idea to his wife Ruth Langsford, 61, after signing up to his new breakfast show on GB News, which kicked off this week. The 62-year-old’s new job alongside Isabel Webster, means he’s back to super early alarms for a start time of 6am.

The presenter claimed he was “trying to be considerate” when he asked Ruth if she’d like to stay in a separate room, so he doesn’t wake her up at such a time, but she wasn’t impressed.

“I really struggle getting myself dressed in the mornings because of my back problems, and the last thing she wants is me clattering around with the lights on at 3am,” he spilled.

“In our bedroom we’ve got a bathroom that works really well for getting ready for work, and all my clothes and the extra things I’ve been using to help get myself dressed are there too, so I just thought it might be good if she went to the other room.”

But, his spouse didn’t like his suggestion and refused to sleep in the other room.

He added to The Sun: “She glared at me angrily and told me in no uncertain terms that she won’t be moving, so I think that means I’m being turfed out. She was deadly serious.”

Eamonn and Ruth had previously presented This Morning together for 15 years.

The pair mostly hosted the show on Fridays and during holidays when Holly Willoughby and Phillip Schofield were away.

Last year, their weekly slot was taken over by Alison Hammond and Dermot O’Leary.

At the time, Eamonn and Ruth respectively supported their replacements and told fans they’d be back soon.

The presenting duo were last seen fronting the show for a six-week period in the summer.

While Ruth still remains a member of the team, last month he announced he had stepped down to join GB News.

In a swipe at his former workplace, he added: “I’m looking forward to a move somewhere new where they’re pleased to have me. But I wish everyone well at ITV.”

He went on to say the GB News team “clapped as I came in”.

Eamonn’s new role has been praised by many viewers online.

Patricia Deri commented: “Terrific show Eamonn and Isabel, i will be watching!”

Dave W typed: “It’s great to see you on a balanced news channel listening to all opinions. Breath of fresh air.”

“Vast improvement! I really enjoyed it! All the best,” Marc added.

Kevin Milligan added:”Good to see you back presenting Breakfast again. A masterclass in how to do it.”

Breakfast with Eamonn and Isabel airs on GB News from 6am.