The late Princess Diana would have celebrated her 60th birthday on July 1, 2021. So, her sons are banding together to immortalize her with a statue made in her honor. Prince Harry, who has made his home in the United States, will fly across the Atlantic and join Prince William at the unveiling of the statue. Wills and Harry are slated to make speeches at the unveiling, per the Daily Mail, and honor the people’s princess, as well as thank sculptor Ian Rank-Broadley for his artistic contribution.

Kate Middleton will also be present for the unveiling. The Mirror reports that the Duchess of Cambridge will accompany William because she “has seen this project evolve from its conception and now to the finished article and undoubtedly wants to be there to support her husband.” (Meghan Markle reportedly wants to attend, but it’s unclear if she will since their newborn, Lilibet Diana, is only weeks old.)

However, what should be a happy occasion for the brothers to bond over their mother might be fraught with tension. Since leaving their royal duties and trekking across the pond, Harry and Meghan spilled the royal tea in a tell-all interview with Oprah Winfrey, which further fractured their relationship with William — though the brothers reunited at Prince Philip’s funeral in April. In the interview, the couple claimed Kate made Meghan cry before her wedding and Harry’s relationship with William currently involved “space.”

Now, a royal expert has weighed in about how their upcoming reunion may go.

Princess Diana's boys will reunite for her sake 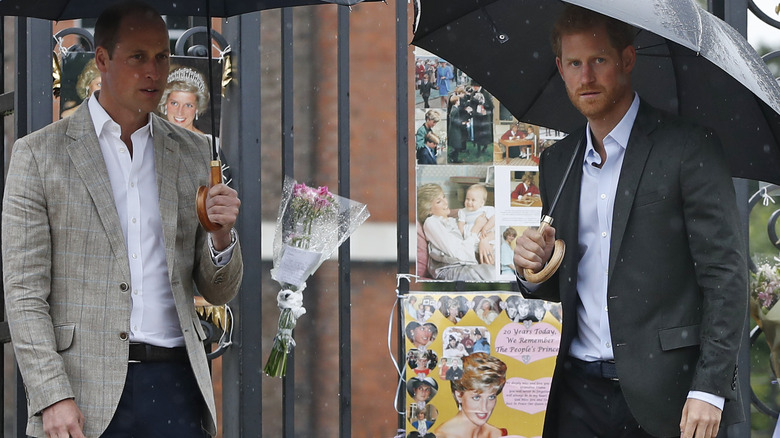 Princes William and Harry were close before their royal households split in 2019. British historian Robert Lacey spoke to “Good Morning Britain” (via Daily Mail) about their upcoming reunion. “Surely when they’re gathered together to honor their mother and what Diana stood for, that will be the time when we can hope for some sort of reconciliation and serious talk,” he explained. Lacey felt that it was time for the brothers to be authentic with each other. He added, “Otherwise if they just appear together in public in front of the statue and there’s nothing more, I think we would rightly conclude that it’s a superficial gesture.” After all, they’re paying tribute to their mother, who would surely be saddened by the state of their relationship.

Next week, William and Harry have every opportunity to make things right. When Diana celebrated her final birthday in 1997, she discussed her new life after divorcing Prince Charles with Vanity Fair. She let go of her old wardrobe on June 25, 1997, when Prince William inspired her to auction off some clothes for charity and she thought the idea was so “appropriate and simple.” And on her birthday, Prince Harry convinced his classmates to sing “Happy Birthday” to his mom over the phone, per “The Diana Chronicles” (via Good Housekeeping). That was the William and Harry she would want to remember — giving and selfless. Perhaps this will be time for them to start anew.