Regina King has been delivering one legendary red carpet look after another this year, from her stunning Louis Vuitton look at the Golden Globes to gorgeous looks in shades of rust and poppy to the NAACP Image Awards and CDGA Awards by Oscar de la Renta and Christopher John Rogers respectively. For Hollywood’s biggest night, King tapped Nicholas Guesquiere of Louis Vuitton once more, this time for a custom look that feels more fairy tale and dreamy than sleek and modern.

Award seasons in the time of COVID have been all about digital red carpets, Zoom acceptance speeches, and socially distant seating. And while much of that will remain for the 93rd annual Academy Awards, this evening promises the first in-person red carpet since 2019. King never disappoints on the carpet, but this look feels like the perfect finale to a season of showstopping looks. 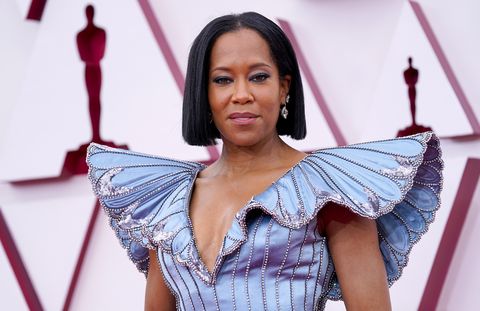 King’s sky blue gown has modern-day Cinderella vibes, encrusted with crystals and featuring a plunging v-neckline with dramatic winged shoulders. The look feels more whimsical than anything King’s worn this season, yet embraces the architectural details and curve-hugging silhouettes we expect from her on the red carpet. Given the playful nature of the silhouette, King kept the styling simple with a hint of edge, opting for a sleek bob, a steel blue smokey eye, and Forevermark jewels.

King will present an award this evening and the 2019 Best Supporting Actress winner joins her cast and crew from her directorial debut One Night in Miami on the red carpet to celebrate its Oscar nods, including a Best Supporting Actor nomination for Leslie Odom Jr., whose nominated for his role in the film. 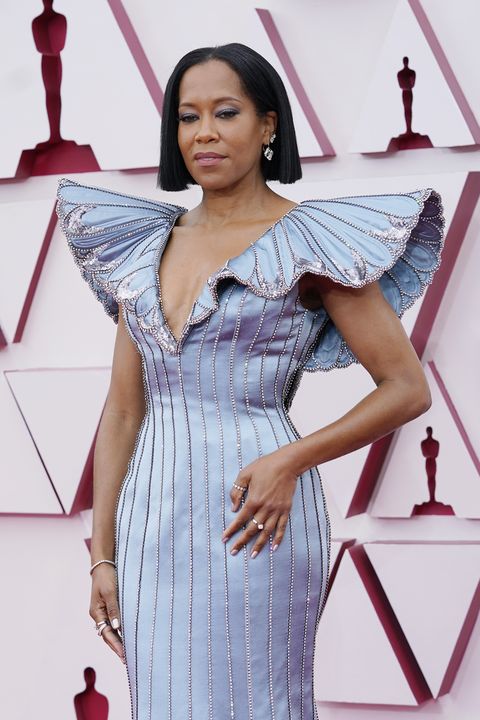 In speaking with Regina’s stylists, Wayman and Micah, E! News reports that Regina’s gown “took 140 hours to make and is embroidered with over 62,000 sequins and 4,000 crystals.” The duo also explained that Regina is always involved in the design process of her red carpet looks from start to finish, reviewing sketches, colors, design, and all the details before the look comes to fruition in the atelier and on the red carpet. “We tell her our vision and what we want the story to be and then we build from there,” they explained. “We approach it from a fashion standpoint and she approaches it from a technical standpoint with a director’s eye.”