Rebecca Judd is doing the vacuuming, and not in a faux 1950s magazine shoot way. In the few minutes between the wide gate on her Melbourne bayside rental home swinging shut behind the Sunday Life fashion team and the start of this interview, she has thrown on her trackies and hit the cleaning.

She's wearing a funky, black two-piece by activewear It-label Jaggad (of which she's part-owner), and her hair and make-up are still, somewhat incongruously, camera-ready. But she is putting her back into the vac with the same speedy gusto as the next working mother with a spare five minutes. 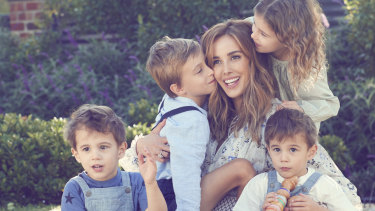 "As soon as they left, I'm back in this; I live in it, it's comfy as," she says, referring to her clothes. "And the whole sneaker trend, how good? I hate heels." She sounds 100 per cent more natural than many of the social influencers out there.

This may come as a surprise to those who first came across Rebecca in a plunging red Tarvydas dress at the 2004 Brownlow Medal ceremony, accompanying her then boyfriend and Carlton football star Chris Judd. Since then, she has become best recognised in the fashion stakes for her association with upscale couture label, J'Aton.

But in real life, she prefers "one of the dressier sneakers" with a dress. "Remember five or 10 years ago, the trend was those ridiculous big platform heels? Horrific!" she says, laughing. "I've got a pair, a very expensive pair I bought. I wore them once and they're sitting there because I can't bear to throw them away."

Perhaps her refreshingly no-front style is down to Rebecca's upbringing. You may not suspect it if you follow her on Instagram, but she grew up far from leafy-suburb designer land.

Living between the homes of her separated New Zealand-born parents, Kerry Brown and Hugh Twigley, in Perth and regional WA respectively, she learnt the value of work. "We didn't have much at all, and Mum and Dad worked their butts off … Dad was a miner and Mum worked in TV, but part-time.

"They split up when I was four, and I lived with my mum, stepdad and my sister [Kate Twigley, with whom she is still very close], and stayed with Dad and my stepmum on school holidays. They lived regionally."

Rebecca credits dealing with that sense of otherness that came from having separated parents – along with the routine rejection of the modelling world ("You have a 90 per cent rejection rate") – for helping her build considerable resilience.

"Growing up, I hated that I didn't have my mum and dad together," says Rebecca, managing to stay on a train of thought despite chatty little visits from two-year-old twins Tom and Darcy, five-year-old Billie and seven-year-old Oscar to the large sitting room where we are talking. "Everyone else seemed to have Mum and Dad living together, and I'd see Dad at weekends. You know when you're a kid and you do not want to be different? That was what made me different."

Rebecca remains close to mum Kerry, who stayed with the Judds in Melbourne for the first year of the twins' lives to help mind them and their siblings. She then returned to WA and now works for Fortescue's Cloudbreak mine in the Pilbara driving trucks.

Rebecca also sees dad Hugh regularly; he has only just returned to WA after a visit.

She says her parents' split has made her "absolutely determined to keep it together" with her husband, Chris. "The kids have seen it in other kids' parents or heard about it, or seen it on TV, and think it's kind of normal, which it is really – but I have said to them we will never, ever, ever break up." 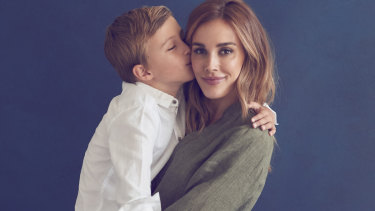 The pair has been together for 15 years and celebrated their eighth wedding anniversary last December with a sweet kitchen selfie, in which Rebecca remarked how lucky she is to have this guy who brings her "a double shot latte in bed every morning".

On the eve of Mother's Day, Rebecca paints a charming picture of her home life, in which balance – and what sounds like a pretty good level of domestic equality – is achieved by each parent taking half of the children's routine for the day. Chris does the school run in the morning, Rebecca most of the pick-ups, the homework, dinner and bath time in the evenings.

"Chris will wake up before me, come downstairs, put the coffee machine on, come back up with a coffee in each hand, and a bottle in each of his pyjama pockets, one for Tom and one for Darcy, get the twins up, change their nappies, then bring them into bed with us," says Rebecca, who describes herself as the "slower riser".

Chris then makes the school lunches three days a week for Oscar and Billie (on Wednesdays and Fridays they are allowed a lunch order of a sausage roll and a toastie, respectively) and gets them to school. Meanwhile, Rebecca wrangles the twins around her Monday and Tuesday afternoon KIIS FM radio gig, 3pm Pickup, her Wednesday shoots for Nine's travel show, Postcards, and sorting any other work for her clients. 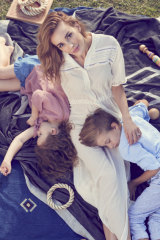 "If I work more than three days a week, I start to feel a bit anxious," explains Rebecca. "I need to spend more time at home, but if I've got a quiet work week, I feel like I need to get out of the house."

The couple sit down on Sunday nights and do an "epic diarise", synching their calendars for the coming week, each sending shared invites to the other so clashes in nighttime plans can be sorted early and all kids' arrangements, down to birthday party invites, can be factored in.

The family has a part-time nanny, Charlotte, who during this interview is buzzing about with the toddlers in the background, keeping them busy watching their favourite movie, Cars 2, for the "200th" time.

The twins wander in and out while their mother is chatting, taking turns to drape themselves over her lap. Probably by necessity, Rebecca seems to have speaking to more than one person at once down to a fine art: "That is one of the biggest challenges as a mum," she says. 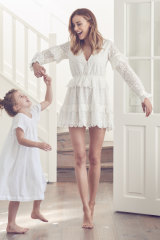 "People say having large families is the best, because they learn to play better and are more independent, but that is something I feel guilty about, especially when they are all yelling at me at the same time. You have to accept one, and reject the other three."

"If they all want me at the same time, when you think about it there is a 75 per cent rejection rate on their request for Mum's time," she adds. "If you want to attend fully to them, you can only do that 25 per cent of the time. The more kids you have, the less that [percentage] becomes."

So how does she cope in the years since two kids became four? Fitting in rare catch-ups with her Perth school friends (eight of them now live in Melbourne), tennis three times a week, plus events? It seems to be this well-honed family routine – and that resilience.

The latter has carried Rebecca through plenty of attention towards her body and, thanks to her 700,000 Instagram followers, her life generally. 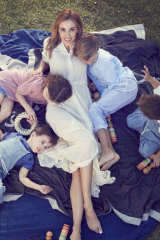 'Her strategy with her image is straightforward: "Share the real me." She does, though, admit to finding some of the picking over of her shape tiresome. "Scrutiny of my body has been going on my entire life," she says. "Does it get boring? Yeah, it gets boring, but look at my family, we've all got the same legs! It's boring, but I don't think it's going to go away. I've just learnt to deal with it.

"Most of the audience out there who've been following on Postcards, or the weather on Nine [the TV presenting role she chose to leave after Billie's birth] or Instagram, have been following me for eight years, and see I'm still the same. Occasionally, some blow-in will have a go, but I'm good at blocking and deleting. I used to leave it [negative social media comments] up there, and it would fester and fans would weigh in."

She is now also off both Facebook and Twitter. To meet this high-action, genetically blessed mother of four, though, you get the feeling the bodyimage haters could dig as hard as they liked. What you see with Rebecca Judd is very much what you get.

This article appears in Sunday Life magazine within the Sun-Herald and the Sunday Age on sale May 12.