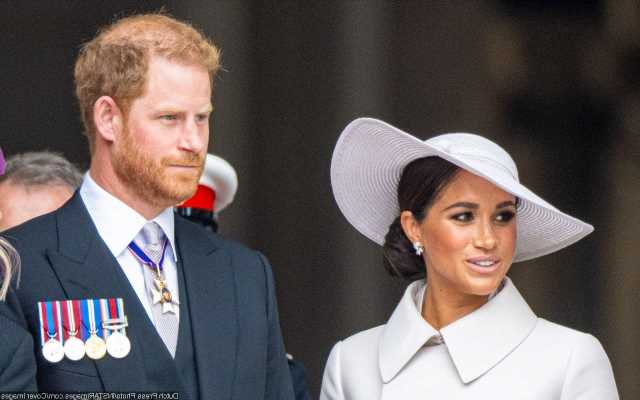 The Duke and Duchess of Sussex reportedly have flown back to California following an extended mourning period for the death of Queen Elizabeth II in the U.K.

AceShowbiz -Prince Harry and Meghan Markle are returning home. The Duke and Duchess of Sussex have flown back to California following an extended mourning period for the death of Queen Elizabeth II in the U.K.

According to a new report, the couple left the country on Tuesday, September 20, a day after the late monarch was laid to rest next to her husband, Prince Philip, at the King George VI Memorial Chapel at Windsor Castle.

It was previously reported that Meghan sent a formal request to have a one-on-one meeting with King Charles III to clear the air before she returned to the U.S. It remains to be seen if the King actually accepts the request and the solo meeting really takes place.

He went on to detail, “Basically, according to this letter, she feels it would be an opportunity to clear the air, pull the rights from wrongs, and explain some of the rationale behind what they’ve been doing over the last two years.” Neil also claimed that the letter came right before the royal family entered a week-long period of private mourning following Queen Elizabeth’s death on September 8.

While the reporter acknowledged that it’s a “very brave move” from the mom of two, some Internet users were not impressed. Dragging the former “Suits” actress, one person accused Meghan of “trying to manipulate the King.” Meanwhile, another user penned, “This is very disrespectful. He just lost his mother, his Queen, and was thrust into a new role with huge responsibilities. This is NOT the time or place.”

Some others hoped King Charles would not agree to the Duchess’ request. “Don’t do it Charles ! If she doesn’t get what she wants she’ll probably say you made a pass at her. This woman is truely unbelieveable !” one person noted.