It’s a truth universally acknowledged that if you are an actress/model between the ages of 25 and 50, Pete Davidson has dated or is about to date you. And he’s currently in something resembling a relationship with Emily Ratajkowski. At least, that’s what a DeuxMoi tipster, pap photos, and an interestingly-timed tweet would have us believe. And while Pete and EmRata have only been together for approximately five minutes, there have been new updates about their relationship basically every day. So yes, a timeline is in order.

Pete and EmRata star in a campaign for Moose Knuckles together, and the creative direction is…interesting!

EmRata defends Pete during an appearance on Late Night With Seth Meyers, telling Seth that she fully gets why women are into him and his BDE:

Amid cheating rumors, Entertainment Tonight reports that Emily and Sebastian Bear-McClard are divorcing after four years of marriage. “Emily and Sebastian have split. They had been having issues as a couple for a bit,” a source says. “Emily is focused on herself and their son. Emily is adjusting to this change and plans to file for divorce soon.”

E! News reports that Pete and Kim Kardashian have broken up after almost a year of dating (they got together in October 2021, giving “spooky season” a whole new meaning). The outlet says Kim and Pete have “a lot of love and respect for each other,” but long distance “made it really difficult to maintain a relationship.”

A DeuxMoi tipster blows up everyone’s phone and claims they saw Pete and EmRata on a date in Brooklyn—and that “his hands were allll over her and they’re clearly clearly hooking up.” 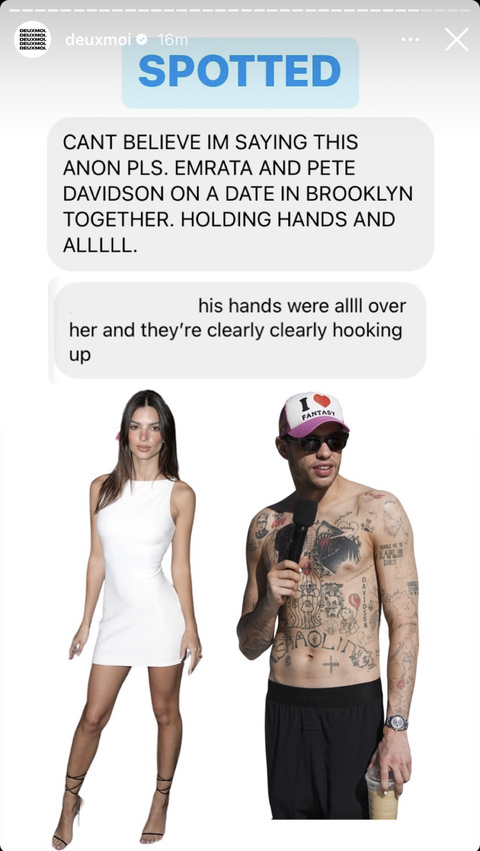 While the internet has a meltdown, Emily not so subtly likes this tweet: