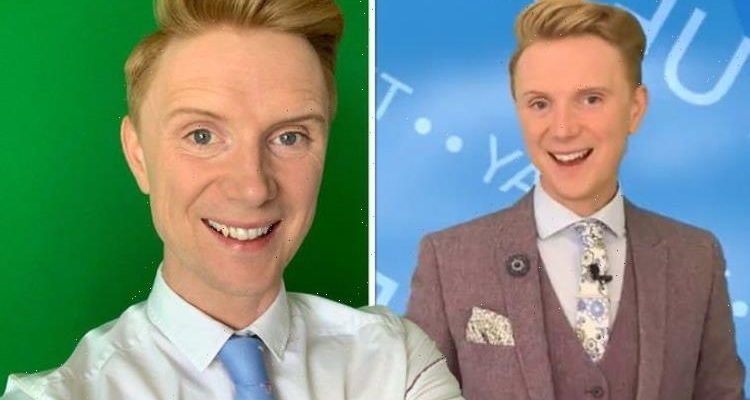 Owain Wyn-Evans has opened up about some of the problems he’s had presenting on the BBC. Chatting exclusively with Express.co.uk, the much-loved weather broadcaster admits he’s had a few blunders during his time on air.

The star was one of the first weather presenters to be working completely from home during the Covid-19 lockdown.

Speaking about this time, the presenter admitted it came with some problems while broadcasting.

He explained: “A house isn’t set up to be like a broadcasting place.

“I turned my house into the broadcasting room overnight.

“And one of the biggest problems was my cat actually, because I started doing weather forecasts from the garden.

“You know, I’d stand there and I’d set up the camera on a tripod and get my mic on and do a take.”

However, he admitted this is where it would start to go wrong for him.

Owain continued: “I would go back and start editing it together and realise that the cat would be sort of mincing across the grass in the background nonchalantly and then she sort of sit down with me.”

Luckily for Owain, the blunder turned out to not be such a big deal as viewers started requesting the cat make more of an appearance.

He continued: “The viewers actually liked it to be able to tweet me saying, ‘Oh, more of your cat, please.’

“So I ended up actually bringing the cat into my weather forecasts.”

At the time, he was mainly broadcasting for his role on BBC Radio Wales.

However, he’s since been appearing on screens during BBC Breakfast after landing the job as a cover presenter in February.

As well as this he’s been reporting for The One Show and broadcasting with Carol Vorderman on BBC Radio Wales.

As many will know, Owain went viral during the height of the pandemic when he shared a video of him drumming to the BBC theme tune.

Owain also opened about this, admitting it wasn’t really his idea to do it.

He shared: “A colleague of mine at work mentioned the idea of me drumming along to the BBC News music.

“I’ve been doing drum covers for years, really, and just putting them up on YouTube or tweeting them with varying degrees of success.

“And anyway he said, ‘Oh, you should definitely do the BBC News music because you know, it’s a banger.

“So I thought about it and then lockdown happened and I remember chatting to my husband about it and we had the idea.”

However, he admitted: “Oh, my gosh, I absolutely had no idea that it would do what it did.”

Fans of the weather presenter will also be seeing more of him on screens soon as he is set to appear on Celebrity Mastermind when it returns.

As well as this, the host says to expect more drum covers and quirky weather reports on the BBC.