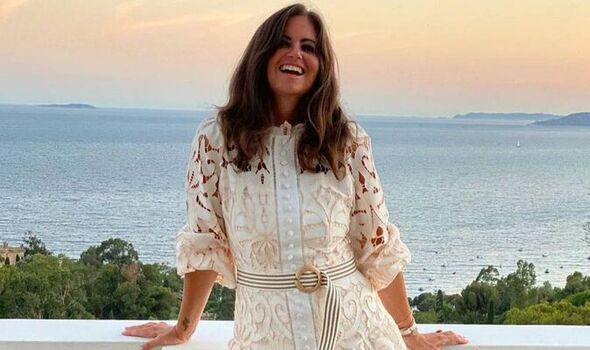 She also inspired a record number of people – more than 170,500 – to get checked for the disease between May and July. In a TV interview, Deborah’s mother, Heather James, said she could not have coped without the public’s support. She said: “I still find that amazing, that she had the love of the people out there.”

“That meant a lot, it’s meant a lot to the family and it still does.”

Heather added: “I think the hardest thing was knowing she was going to die.”

“My heartache was knowing as a mother, I couldn’t do anything about that and I think that was the hardest for me to cope with.”

Heather was Dame Deborah’s main carer when she moved to her parents’ house in Woking, Surrey, to receive end-of-life treatment.

She said: “I can remember lying in bed, probably just about a week or so before she died.”

“She said, ‘I have no regrets’ and I went, ‘That’s brilliant’, how many people could say that?”

Dame Deborah died with her husband Sebastien and their two children, Hugo, 14, and Eloise, 12, by her side.

Heather said: “We were given three to five days, Deborah lived eight weeks.

“That eight weeks was probably, in one way, the best eight weeks we’ve had together as a family, even though she died at the end of it.

“How can you not love what she did in that eight weeks?

“And it did help knowing other people loved her and wanted to help in any way they could.”

Dame Deborah was honoured with a damehood for her “tireless campaigning” to raise awareness of bowel cancer.

It was conferred on her in May by PrinceWilliam, who made a surprise visit to her parents’ house. Heather said of the Duke of Cambridge: “He put us so much at ease when he came in.

“And he was just like one of my son-in-laws, he just sat down with us. He was so lovely. I think he is a people’s king.”

Genevieve Edwards, chief executive of Bowel Cancer UK, said: “From the moment Deborah was diagnosed and right until the end of her life, she campaigned tirelessly.

“She was a phenomenal campaigner and you can just see the impact that she’s had there with people coming forward.”

“And if those thousands of people who’ve come forward – the majority of them probably won’t have bowel cancer – but for those that do, that’s life-saving.”

Ms Edwards added: “I’ve spoken to so many people with bowel cancer who’ve felt that they’ve had the confidence to go and tell their own story now because Deborah did so.”

“She communicated so well and connected and they felt that they’ve been able to go. It’s all of those little conversations, like ripples in a pond, that will keep going.”

“And that’s really important because bowel cancer is not an easy one to talk about.”

Dame Deborah’s campaigning efforts also included launching a clothing range with In The Style, to raise money for her Bowelbabe Fund.