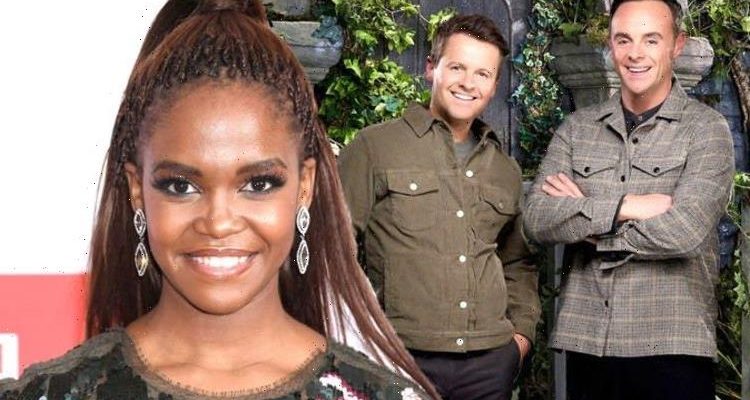 Strictly Come Dancing star Oti Mabuse, 31, teased an appearance on I’m a Celebrity.. Get Me Out of Here! in the latest episode of her podcast, The Rhythm of Life. The dancer was joined by TV star Vicky Pattison, 33, who won the show in 2015.

I love that show, I’m obsessed with I’m a Celebrity.

Oti discussed Vicky’s time in the show, and her love for the programme.

She said: “I love that show, I’m obsessed with I’m a Celebrity.”

Vicky then quickly replied: “I can’t wait to see you pop up on that show, I swear to God, you’d be so good.

“The timings would be hard with Strictly I know.”

Oti was quick to tease an appearance and explain to Vicky about what is holding her back.

She continued: “It’s not even that, it’s the snakes bit and eating things and I don’t know.

“I can run up the mountain, that’s fine.

“But, put me in a cage with snakes and crickets and cockroaches and say move your tongue, I can’t.”

Oti will leave fans to speculate whether she will one day pluck up the courage to take part.

Vicky did not mind the eating trials and was lucky not to have to do many during her stint in the show.

The Geordie Shore star said: “I approached it with the polar opposite [view].

“I was fine with that part. I just thought I have had far worse things in my mouth.”

At this point in the podcast Oti could not control herself and applauded with hysterical laughter.

Vicky took part in the show’s 15th series, and was crowned queen of the jungle.

Oti said: “One of the moments I think was really really big and totally unexpected was you going in I’m a Celebrity… Get Me Out of Here!, not just going in but people falling in love with how authentic and real you are and then winning it.”

Since 2015, Vicky has had many opportunities due to the show, for one starring in the Australian I’m a Celebrity.

Vicky explained in the podcast that she did not really eat many awful foods while in the British version, but whilst appearing on the Australian version she ate her fair share.

Fans of Strictly have been left wondering whether Oti will ever give up her dancing shoes for life down under.