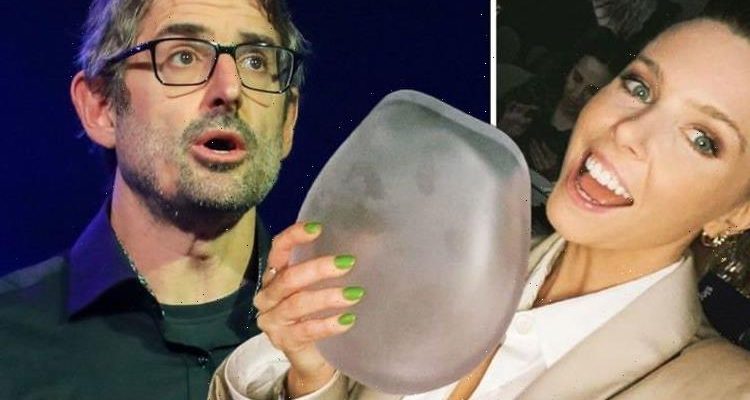 BBC presenter Stacey Dooley has taken to Instagram following her win at the Women in Film and TV Awards this evening. Sharing a series of celebratory snaps, the flame-haired star, 34, poked fun at herself for the win, insisting that she wouldn’t have won the presenting award if it had included male nominees, as it would have gone to another BBC documentary filmmaker instead, who was also present at the event.

In view of her 992,000 followers, Stacey documented her time at the award ceremony, which was held in London.

In another snap, Stacey posted a picture of herself on the red carpet as she attended the event.

The BBC host wore her ginger locks in a smart, mid-height ponytail, which she paired with minimal gold jewelry.

She donned a chic, two-piece cream suit which she paired with an open-neck white shirt, making for a risque display.

In the caption, Stacey joked that she was thankful it was an awards event dedicated solely to women in film and tv.

She went on to explain that she didn’t think she stood a chance with award-winning documentary maker Louis Theroux in the room.

She wrote: “Thank God it was women in film and television awards.

“The only time I’m gonna win Presenter award when Louise Theroux b****y sat there,” she wrote alongside a laughing face emoji and green heart.

The star also shared her boyfriend, Kevin Clifton’s, response to her win.

Posting the celebratory news to his Instagram stories, Kevin wrote: “So proud of you @SJDooley,” which she went on to re-post.

After last year’s awards ceremony was cancelled due to the coronavirus pandemic, this year promised to be bigger and better than ever before.

Featuring a whole host of celebrities from the likes of The Great British Bake Off’s Mel Giedroyc, to Newsnight anchor Emily Maitlis, men were also invited to the star-studded event.

Elsewhere, Stacey told how she and her former Strictly Come Dancing pro boyfriend Kevin always end up arguing over filming a “self tape”.

The couple spoke together on the BBC podcast Stacey Dooley: Fresh Starts about Kevin’s new acting and musical role in Singin’ In The Rain, following the dancer’s departure from Strictly Come Dancing.

Kevin was quick to refute girlfriend Stacey’s claims that filming a self tape was difficult, playfully suggesting that it was only difficult because of Stacey, not him.

Stacey said: “Filming a self tape with Kevin is such a saga. We always end up arguing.”

Kevin said: “Because of COVID we couldn’t do many in-person auditions so we had to film us doing the scene at home and send it to (the producers),” he said.

He went on to explain that Stacey always wants to be “so involved” in the scene and act it out fully before adding that scenes need to be read over in a normal voice.