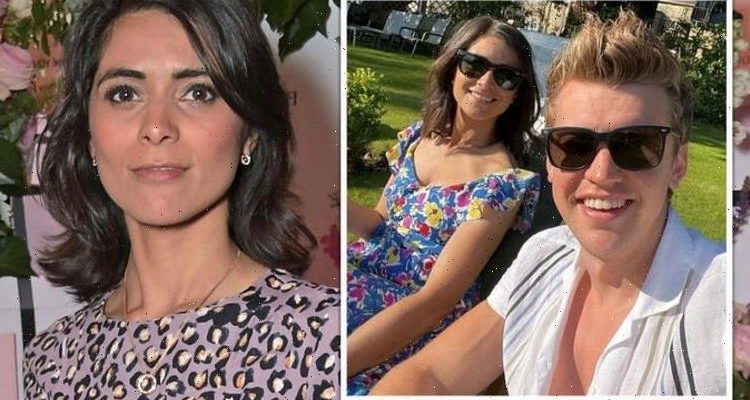 Lucy Verasamy is normally seen on ITV presenting the weather on her own, however this year she has been travelling across the country to film scenes for a new TV project with a presenting partner. And today, the TV star has addressed becoming a duo.

Lucy has been working with M&S chef Chris Baber to host a series of programmes, which shine a light on British farmers, growers and producers.

Fresh Market is a partnership between Marks and Spencer and ITV.

After completing filming this week, the 41-year-old took to social media to mark the occasion, while reflecting on the past six months.

She said it had been “a blast”, despite it being a very different role for her.

Alongside a picture of the presenting duo posing for a photo in the sunshine, she wrote: “Filming the last 6 months with @chrisbaber – and it’s been brilliant.”

Going into more details, she added: “I’ve only ever presented solo – but love being part of a duo!!”

Writing in view of her 153,000 Instagram followers, she went on to reassure fans that she would be back presenting the weather almost immediately.

“Back on the @itv weather today,” Lucy added.

Her co-star posted the same picture on his own account.

“@lucyweather had a belter of a year working with you! But haway it’s gotta be your turn to cook next right? #dreamteam,” he captioned the snap.

In the image, Chris could be seen in a casual white shirt, while Lucy stunned in a colourful floral dress.

Both sported sunglasses as they made the most of the warm weather.

“Dream team,” one follower agreed when they took to the comment section of the image.

“I’m hoping she’ll be too busy on Strictly!!” another hopefully wrote beside a prayer and fingers crossed graphic.

“That’ll be me,” Chris replied with a laughing emoji.

In addition to her post, Lucy also shared a series of snaps on her Story.

They captured the duo alongside the behind-the-scenes cast and crew.