“These tensions are not good for the global economy and they’re not good certainly for the regional economy. I think that is a view shared across the region. 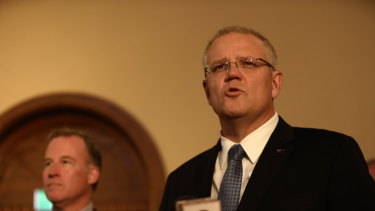 “We’d be very keen to see these issues resolved between China and the United States.”

Australia was not “choosing sides” and had excellent relationships with both countries, he added.

Labor's foreign affairs spokeswoman Penny Wong said: “Nobody wins from a trade war, and a trade-dependent country like Australia is especially exposed."

“The trading system matters to Australia and we urge both countries to continue to work towards a resolution.”

China showed no signs of backing down from its retaliation to US President Donald Trump's tariff threats, after the US trade office began examining $US300 billion ($430 billion) in Chinese goods, ranging from toys to mobile phones, that could next be hit with a 25 per cent tariff. 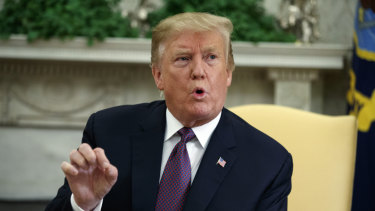 US President Donald Trump has deepened his trade war with China by announcing potential tariffs on another $US300 billion worth of imports. Credit:AP

Chinese state television announced Beijing would raise tariffs on $US60 billion in American goods – a response to Friday's $US200 billion tariff hike by Trump – with a dramatic flourish: "If we talk, our door is always wide open; if we fight, we'll fight to the last."

Share markets have plummeted as investors were jolted by the return of tit-for-tat tariffs after a six-month truce as the world's two largest economies tried to reach a trade deal.

Director of the ANU's East Asian Bureau of Economic Research, Shiro Armstrong, said: "Whoever wins government will have to be clear that the multilateral trading system – and hence our economic and national security – is at risk from the America First agenda and the US-China tensions and be an active part of a collective effort with other countries to protect that system."

He said Asia "depends more on the open multilateral trading system than any other region" and Asian countries, including Australia, need to form a coalition to protect their interests.

Dr Armstrong, who examined the impact of a trade war for the Productivity Commission, said the new Australian prime minister "will be put to the test quickly" with trade tensions likely to dominate the G20 summit in June.

Mr Trump tweeted: "There will be nobody left in China to do business with. Very bad for China, very good for USA!"

Chinese television news bulletins assured viewers that American consumers would bear the brunt of the tariff war and the US economy would be worst hit. 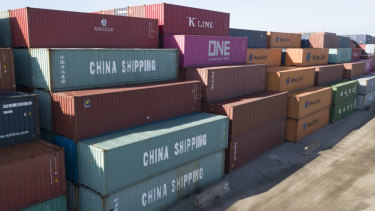 China Shipping Company and other shipping containers are stacked at the Virginia International’s terminal in Portsmouth, Virginia, US.Credit:AP

They reported the Chinese government had introduced financial assistance packages for small businesses to help them cope with any international crisis, in a concerted propaganda campaign to assure viewers of China's economic stability.

Dr Armstrong said: "China can't easily back down from retaliation politically, else it looks weak domestically and internationally."

"Protectionism will slow global growth, as the IMF and OECD are already saying."

Chinese President Xi Jinping and Trump are expected to meet at the G20 in Japan after the June 1 start date for Chinese tariffs on US goods that could include gas, fruit and vegetables.

Foreign Minister Wang Yi said trade negotiations had "made important and substantial progress" but also faced difficulties that needed to be taken seriously to be solved.

"Unilaterally accusing the other party is meaningless… and trying to exert extreme pressure will only trigger a legitimate counterattack," he said in Russia on Monday.

US stock markets closed sharply lower, with the Dow Jones Industrial Average down 2.4 per cent – the worst day this year. The tech-heavy Nasdaq Composite also suffered its worst day of the year, down 3.4 per cent. Shanghai's stock market was supported by state-backed buying of equities, Reuters reported.

The threat of tariffs on a final $US300 billion of Chinese goods – essentially all Chinese exports to the US – was criticised by the American National Retail Federation as "far too great a gamble for the US economy".

"Taxing Americans on everyday products like clothes and shoes is not the answer for holding China accountable," Chief Executive Matthew Shay said.

Trump remained defiant, telling reporters at the White House: "We take in billions of dollars, it’s a very positive step, I love the position we’re in.