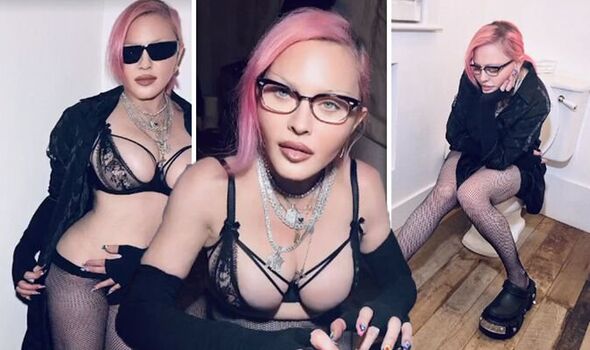 Madonna, 63, poses in racy lingerie and fishnets as she suffers from ‘writer’s block’

Madonna shocked her fans once again as she showed what she gets up to after suffering from “writer’s block”. The singer took the opportunity to pose in her underwear and show off her ageless figure.

Madonna, 63, is known for her racy snaps and last night was no different, as she posed for a photoshoot in her underwear next to a retro typewriter.

The Like A Virgin hitmaker showed her 18.5 million Instagram followers her procrastination struggles as she posed for revealing snaps.

She posed at her typewriter in large spectacles and a barely-there lace bra, exposing her nipples and showing off her ample assets.

Madonna didn’t get much songwriting done, as she showed off her incredible body while lying on the floor in just her underwear and fishnets.

The singer then covered up with a lace patterned overall as she sat on the toilet during her revealing photoshoot.

Madonna admitted she was struggling to get any songwriting done

Madonna posed with a typewriter before admitting to her 18.5 million Instagram followers that she was suffering from “writer’s block”.

Madonna took the opportunity to pose in her racy black underwear

Madonna showed off her ageless appearance as she posed with her typewriter. The singer sat at her desk in just a lace black bra and fishnets.

Madonna then shared close-ups of her enviable figure

Madonna was wearing a high-waisted thong under her signature fishnet tights as she shared the revealing snaps.

Madonna placed her hand over her face as she posed on her side on the floor in just her underwear, showing off her gym-honed figure.

Madonna showed off her flawless complexion with her heavy make-up as she stunned in the revealing lingerie.

Madonna finished the post with herself sitting on the toilet

Madonna then strangely posed for snaps on the toilet to finish the Instagram post as she covered up in a black robe.