It’s the day ‘Law & Order’ fans have been waiting for, with Olivia Benson and Elliot Stabler reunited! Mariska Hargitay and Chris Meloni shared photos on the set of his new ‘L&O’ spinoff series.

Here’s a reunion 10 years in the making! Law & Order: SVU fans have missed the amazing chemistry that Mariska Hargitay and Chris Meloni had as partners, Dets. Olivia Benson and Elliot Stabler, during his 12 seasons on the show. The actor departed in 2011, but Christopher is back in the new Law & Order spinoff Law & Order: Organized Crime, where he’s returning as Stabler and working in the NYPD’s organized crime division. On Jan. 15, the pair reunited on set and couldn’t wait to share the moment with fans via Instagram photos.

Mariska, 56, shared a selfie of a close-up of her face with a smiling Christopher, 59, in the background, holding what looked like a prop knife. “Now even closer” she wrote in the caption, as viewers rejoiced in the comments. Even celebrity SVU fans were thrilled, with both Modern Family‘s Ariel Winter and Jersey Shore‘s Jenni “JWoww” Farley both leaving lines of weary wailing emojis, as they could not take how amazing it is that the two are finally back sharing the screen as Benson and Stabler again after 10 long years.

Christopher shared his own IG post with a black and white selfie showing the side of his face, and Mariska could be seen in the corner kneeling down. He too used a “closer” theme with his caption, writing “We are a little bit closer.” Fans freaked in the comments, with user @feliobrien writing, “I HAVE BEEN WAITING TEN YEARS FOR THIS!!!!” while @giovana.nigro said, “i’m a little bit DEAD” at seeing the two together again. Fan @mariska.joyful cheered, “Benson and Stabler reunion 2021, YASSSSSSS,” while @lyricarawrites claimed, “I’m in tears.” 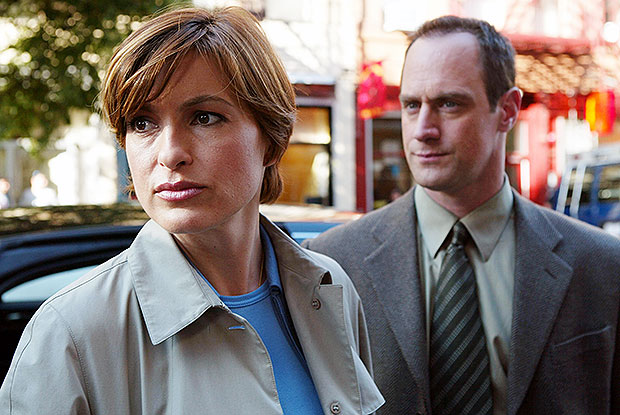 Christopher’s Stabler character was put on leave and later retired from the NYPD after season 12’s SVU finale, following a squad room shootout where he shot and killed the young daughter of a rape victim after she opened fire on possible suspects who could have murdered her mom. The show ended with the teen dying in Stabler’s arms. His departure was explained to Olivia in the opening show of season 13, so fans never got a proper goodbye between Stabler and Benson.

With Chris back in Law & Order: Organized Crime, it puts him back in the position for Stabler and Benson to have possible crossover storylines in the future. Mariska is in her 22nd season on SVU, and Olivia is now commander of the Special Victims Unit unit, getting promoted to captain in the season 21 premiere.