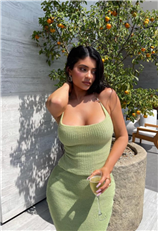 When Kylie Jenner was pregnant with her first child, she pretty much disappeared from public view for the full nine months.

Looking back on it, the move makes perfect sense:

The possibility that Kylie was pregnant sent shockwaves throughout the worlds of social media and celebrity gossip.

Meanwhile, Kylie was a 20-year-old woman grappling the responsibilities of first-time motherhood, who didn’t need to be troubled by a bunch of unwanted attention.

These days, however, Kylie is a self-made billionaire, an experienced parent, and a 24-year-old mogul who exudes confidence in everything she does.

She’s also been very open about her desire to give daughter Stormi a younger sibling.

So fans reasoned that Kylie would be much more open about her second pregnancy.

But now, there’s reason to believe that she’s sticking with the same strategy as before.

Yes, Instagram sleuths believe that Kylie is pregnant once again, and they believe she’s planning on lying low until she’s ready to introduce her new arrival to the world.

During her last pregnancy, Kylie was in the habit of posting old photos that she hadn’t shared before.

This gave the impression that she was still living life just as she had before:

Partying, taking selfies, wearing revealing outfits — in other words, doing all the things her followers want to see her doing.

This wasn’t just vanity, as Kylie rakes in millions every year on the strength of her social media presence alone.

But believe it or not, there are downsides to having hundreds of millions of followers.

One of them is that all that a group that size is bound to have quite a few amateur detectives in it, which makes it very difficult to keep a secret.

“Kylie Jenner definitely is pregnant. She def took all her photos in advance and just look here…” one fan commented on Kylie-focused subreddit this week.

From there, the fan launched into an elaborate theory regarding Kylie’s acrylic talons.

“She has the same nails she wore in June, in her birthday picture she posted,” the fan observed.

A different user pointed out that in commenting on her recent posts, Kylie’s family has been referring to her “baby girl” and “Kylie baby.”

We’re not sure why they would drop hints if Kylie is trying to keep her pregnancy a secret, but a lot of people are convinced that that’s another clue.

Other fans are paying attention to Kylie’s eating and drinking habits, noting that she seems to be skipping the booze and fish these days.

“Kylie eating sushi with no fish??? is she pregnant.”

As for the alcohol, Kylizzle posted a pic of herself with a glass of what appears to be champagne in celebration of her 24th birthday.

But some fans are convinced that recent occasions in which Kylie seemed to sip booze were all for show.

“Kylie has apple juice in her shot glass cuz she’s pregnant again,” one fan observed after Kylie and her sisters did shots of Kendall Jenner’s 818 tequila during the final Keeping Up With the Kardashians reunion show.

Look, it’s possible that these fans are onto something and Kylie really is pregnant — and if she is, she’s got an incredible knack for keeping a secret!