Kylie Jenner claps back at a “lying” Instacart worker.

The youngest sibling in the KarJenner family is not having it! In a TikTok posted Wednesday, user Pablo Tamayo, who has over 400,000 followers on the app, claimed to have delivered an Instacart order to the beauty mogul’s home. In the TikTok, he described Kylie’s order as including a $12 pack of pepperoni from Erewhon in West Hollywood, which he then drove to her home in the greater LA area. He claimed that upon arrival, he saw “all of this security” and thought “this house looks so familiar.”

Imagine pulling up to Kylie’s crib to drop off some sandwich meat!

Apparently, his “best friend Jordy” (shout out to Kylie’s ex bestie Jordyn Woods, LOLz) had previously showed him the house online. Pablo went on to say:

“This bitch could have paid me more.”

Ouch! Safe to say he probably won’t be invited back after that comment…

He also explained that the order was under the name “Ashton,” which he presumed was Kylie’s assistant and was instructed to not leave it outside, but instead had to call and “go through the gate.”

The TikTok then cut from Pablo himself, who was filming inside his car, to Kylie’s front gate where someone was waiting to receive the pack of pepperoni, to which he asked “is this Kylie Jenner’s house?” Now this is where the story begins to get a little shoddy: Pablo claims that the person who met him at the gate prompted him to enter the premises to leave the package at the entrance. He claims to have walked down a pathway with a “river beneath it” and then got to leave it at the front door where he got to see “all these assistants, all these maids” but did not see Kylie or Stormi, but concludes the video by swearing that he “heard a baby scream.”

I CANNOT MAKE THIS SHIT UP i just delivered to Kylie Jenner????????

All right, now that we’re all caught up on what exactly went down with the Instacarter, let’s get into what Kylie’s thoughts were on the story.

While it does align with the fact that Kylie was making some food on Tuesday after posting on her Instagram story that “bae wanted a sandwich,” she didn’t necessarily agree with all the details. In a TikTok that she posted herself, you can see the pepperoni in use (and yes, the sandwich does look amazing), but it was in the comments section where she addressed the story without ever mentioning Pablo by name, explaining:

“No one comes through the gate! the river ?? no river. the lying for attention rubs me the wrong way sorry.” 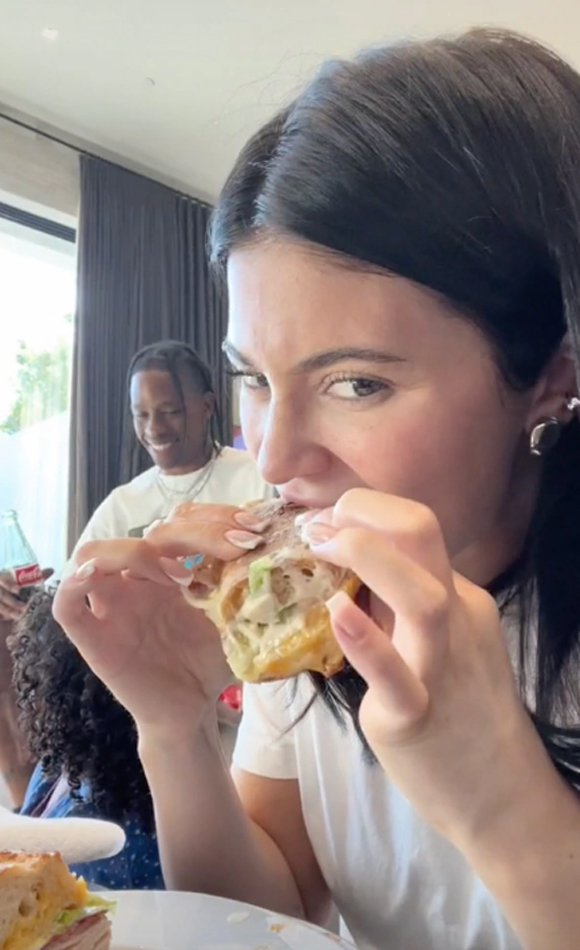 “I did not order this myself. ! he WAS tipped through the app. lied too about seeing through my windows and hearing my son cry. ??”

Kylie also had a message for anyone who may not have understood what she was referring to:

“If you don’t know what i’m talking about just carry on.”

One thing about these KarJenners is they always make sure to cover their bases! For anyone interested in Kylie’s sandwich recipe for baby daddy Travis Scott, see the TikTok HERE:

i’m convinced you either loooooove mayo or absolutely hate it

Pablo returned fire by reposting pics of the sammies with the caption “ur welcome Travis.”

LOLz! What do YOU think of the sandwich situation and the way Kylie handled it? Let us know in the comments below!