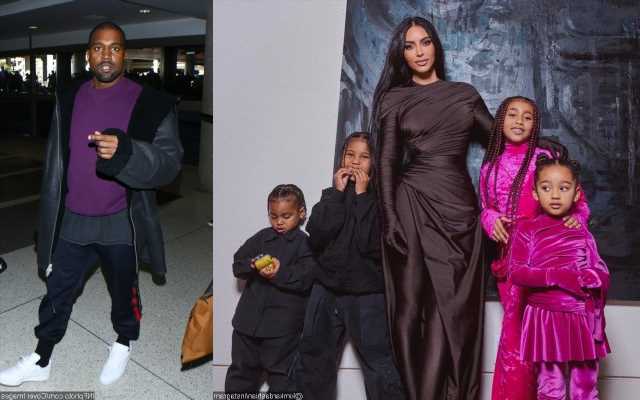 According to a new report, the ‘Kardashians’ star is beefing up security to guard their children’s private school after the rapper revealed the name of the school numerous times during his ongoing online spiral.

AceShowbiz –Kim Kardashian seemingly is concerned about her kids’ safety amid their father Kanye West‘s wild online antics. According to a new report, “The Kardashians” star is beefing up security to guard their children’s private school after Ye revealed the name of the school numerous times during his ongoing online rant.

TMZ states that Kim is paying the bill for extra security at the school. Sources with direct knowledge of the matter tell the news outlet that the decision to increase the security isn’t because the Yeezy designer himself poses a threat. Instead, it’s to prevent strangers from showing up at the school and potentially harming Kim and Ye’s kids and their schoolmates.

The “Donda” artist, who shares North (9), Saint (6), Chicago (4) and Psalm (3) with the SKIMS founder, previously shared that he wanted their children to attend his newly opened Donda Academy full-time. Kim, meanwhile, prefers their children to attend their current school in L.A. for their daily education. She, however, is okay if they attend Ye’s school for extracurricular activities.

Last month, Ye unleashed on Kim about their children’s education. “You don’t have say so of where the kids go to school. Why get say say. Cause you half white? Y’all don’t have so so over my black children and where they go to school. They will not do playboy and sex tapes,” the “Gold Digger” rapper wrote in an Instagram post. In another post, he objected to the fact that the children’s school teaches students about Kwanzaa as saying, “What the f**k is Kwanzaa and who made that bulls**t up?”

Ye later re-emerged on social media to share with his followers that he had a “good meeting” with his ex-wife about their children’s schooling. “Hi guys I’m baaaaack Sorry to take so long to post I just had a good meeting with Kim about the schools,” he announced at the time.

Despite that, it seemed like the meeting didn’t really resolve the dispute. In his recent interview with Tucker Carlson, the Chicago rapper complained about his children going to a school that celebrates Kwanzaa. “I prefer my kids knew Hanukkah than Kwanzaa. At least it will come with some financial engineering,” he shared in an unaired portion of Fox News’ “Tucker Carlson Tonight“.