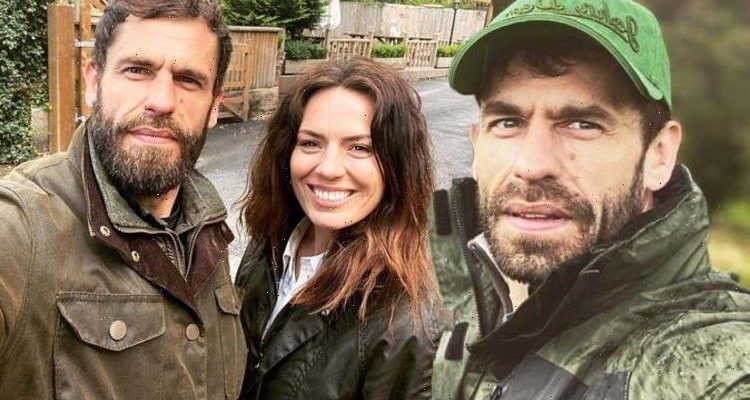 Kelvin Fletcher, 37, has “jumped in at the deep end” and bought a farm in the Peak District. The former Emmerdale actor made the announcement on social media as he posted a bucolic photograph alongside his wife Liz Marsland and their two children standing next to a tractor.

The update came as a double surprise to his 381,000 followers, who also found out that they are set to star in their own farming documentary.

For the announcement, Kelvin re-posted a communiqué from talent management company Intertalent.

The post read: “BBC Studios Documentary Unit has commissioned 6 x 30-minute episodes, which will document the experiences of the family as they move their lives to a 120-acre 18th-century farm in the Peak District to start a farming business.

“Commissioned by head of science and natural history Jack Bootle, the series will be exec produced by the Doc Unit’s Ben Mitchell, with Pip Banyard as series producer.”

Kelvin then addressed his other half’s worries that he and his family are embarking on the journey “with knowledge of farming you could write on the back of a stamp”.

He penned: “So happy to finally announce this!

“If you’ve been sat there wondering what these random farming and outdoor pictures are all about well now you know!

“We have literally jumped in at the deep end and bought a farm!

“A reluctant Wife, 2 crazy kids and a Husband with knowledge of farming you could write on the back of a stamp!

“What could possibly go wrong?!” the actor concluded.

Fans and friends of the star inundated the post’s comments section with well-wishes ahead of his surprise new venture.

“Put me down for eggs, milk and a crop circle.”

“Looking forward to it!”

“Good luck with the venture.”

Kelvin and his wife Liz have been married since 2015.