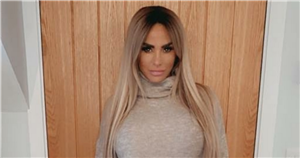 Katie Price has admitted that she once auditioned for a part in the second Sex and the City movie as the "hot nanny".

Mum-of-five Katie appeared on The Fellas podcast this week and chatted candidly about her career and personal life.

At one point, former glamour model Katie, 42, made a frank confession about an audition, saying she once tried out for a part in Sex And The City.

When asked if she’d ever been offered for a role as an actress, Katie admitted the unexpected story.

Get exclusive celebrity stories and fabulous photoshoots straight to your inbox with OK's daily newsletter. You can sign up for FREE at the top of the page.

“What’s that popular film with the four women… Sex In The City," Katie said, "I auditioned to be the babysitter on that. Obviously I clearly didn’t get it… I’ve never done acting and that, I would eventually want to do a film about my life, but I wouldn’t want to act it, I’d want to get someone to do it.”

Alice Eve played the role of Charlotte's "hot nanny" in the second SATC movie, released in 2010.

When asked about who she’d want to play her in a film about her life, Katie said Carmen Electra. “I’ve done a shoot with Carmen Electra and Pammy… Pamela Anderson… they were two girls I’d want to do it.”

Katie also added Julia Roberts, but said she wasn’t sure. “I’ve been around for so long and I’ve got different looks through it all,” she added. Speaking to OK! recently, Katie admitted she “loves” being bankrupt – and wants to stay in it for as long as she can.

In an exclusive interview with OK! magazine, Katie said her bankruptcy is the best thing that’s ever happened to her as she opened up about her wedding plans with fiancée Carl Woods.

“I’ve been sucked dry in the past. I was mentally abused and broken by everyone,” she said. “It’s not like I have skeletons in my closet but everyone tried to get everything they could out of me. But now, I can go to sleep at night and I just think, ‘F**k it.’ “My bankruptcy is the best thing that’s ever happened to me.”

Katie, who was first declared bankrupt in November 2019 after the High Court found she had failed to stick to a plan to repay her debts, continued: “Because anyone who has ever been in my life before has tried to take from me, financially mostly.

"It has been a secret security to me that Carl is not with me for any money I have, as I don’t have millions in the bank. “I want to stay in bankruptcy as long as I can. It’s only supposed to be a year and I’m like, ‘No!’ The longer I can keep it up, the better for me."

She added: "I don’t mean that as I will. My accounts are getting back on track, all is in hand and life, work and business are going from strength to strength.”

Katie has also shared her plans to have children with Carl afterexclusively revealing their engagementto OK!.