A natural beauty: Kate Hudson went makeup free during her latest European vacation outing in Italy. The actress, 42, stopped for breakfast at Caffe Gilli in Florence with her musician partner Danny Fujikawa and their daughter Rani, 2, on Tuesday, Aug. 3. Kate donned a straw hat and sleeveless black dress for the outing. 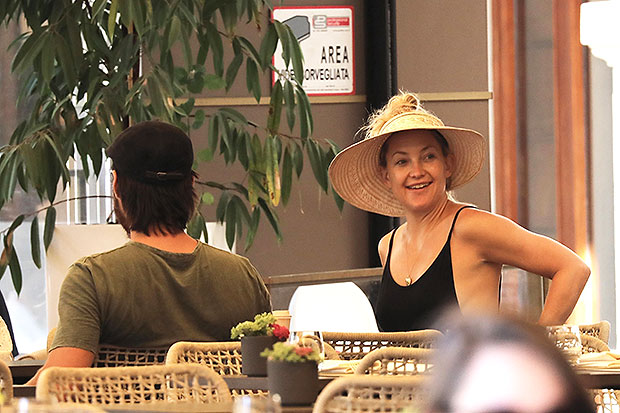 The Golden Globe winner arrived in Europe in June to film the Knives Out sequel opposite Daniel Craig, Edward Norton, Janelle Monae, Kathryn Hahn, and more A-list additions. The actress was spotted filming scenes from the murder mystery film in Greece in late June. Kate even shared a snapshot with Kathryn and gushed about being reunited with her BFF.

“Reunited baby yeah!!!” she captioned a photo of the two with their respective partners. “If we can’t get Kathryn Hahn on @instagram then I’ll just keep having her take these pics with her selfie face and post them myself! Love and missed my bestie.” (The two starred in the 2003 rom-com How to Lose a Guy in 10 Days together.)

Little is known about the premise of the sequel, except that it will follow Daniel’s Detective Benoit Blanc as he investigates a new case. The film will premiere on Netflix. A release date has not been announced yet. With filming wrapped, Kate has been trekking across Europe with her family, including sons Ryder, 17, and Bingham, 10, whom she shares with former partners Chris Robinson and Matt Bellamy, respectively.

The Almost Famous star has been documenting the family festivities on Instagram during the last few months. In July, Kate shared a selfie with Danny and her eldest son Ryder on IG as the trio soaked up the sun aboard a yacht.

She also shared another shot with her sons and captioned the sweet post, “My boys.”

Kate’s famous mom Goldie Hawn also joined her daughter and grandchildren on the first leg of the trip. The actress shared a fun video on Instagram from Skiathos, Greece in late June.

In the clip, Goldie dances along a scenic beach. “Can’t stop, won’t stop dancing 💃 in Skiathos, Greece,” she captioned the post. “Mamma Mia, what an island!!”