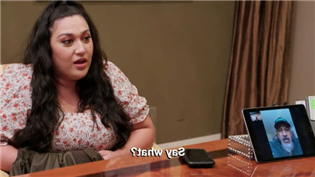 Divorce can be a pain. Many say that the only thing worse is being stuck in a miserable marriage.

He has had years to truly change, but he hasn’t. And she’s had enough.

But her consultation with a divorce attorney leads to a nasty surprise that could change everything. …

On Season 6, Episode 6 of 90 Day Fiance: Happily Ever After?, Kalani wanted to explore her options.

That’s miserable and there’s no reason to live like that … or so she thought.

As you can see in this clip that we have included, Kalani met up with a divorce attorney.

“I’m serious about divorce being an option,” Kalani affirmed.

Sitting down with the Family Law expert, she explained the visa situation as it stands.

Low, Kalani’s father, tuned in to the meeting.

He isn’t just interested as the father and the father-in-law.

In order to get Asuelu’s visa approved in the first place, Low had to co-sign for financial reasons.

Like the decision to marry Asuelu in the first place, that co-signing is now coming back to haunt them.

At the time, Kalani and Low knew that they could be on the hook for Asuelu’s expenses for ten years.

Of course, back then, Kalani couldn’t imagine that she would ever want to divorce Asuelu.

But speaking to Kalani, and to Low — who was participating via video chat — the attorney had grim news.

At that time, disgraced former president Donald Trump had implemented yet another cruel barrier to legal immigration.

That ten-year requirement for financial responsibility had been extended to a lifelong financial commitment.

What this means, fundamentally, is that if Asuelu ever needs social support from government programs, Kalani and Low would be billed.

They would be liable for things like the SNAP program (food stamps) is Asuelu partook of them post-divorce.

The only way out of this would be if Asuelu were deported, if he became a citizen, or if he died.

“Obviously when I had my dad sign that, I could’ve sworn on my life that we would never get divorced,” she commented.

“But,” Kalani confessed to the cameras, “here we are.”

“I feel like I was so in love with him and so wrapped up in our romance that we had at the beginning,” Kalani addmitted.

She lamented “that I was just so stupid with a lot of things.”

Both the attorney and Low advised Kalani to choose her way forward carefully, for her own sake and that of her children.

“I would hope that if we ever got divorced that Asuelu would go back to Samoa,” Kalani expressed.

She wisely predicted: “If he stayed around, it could turn out to be a nightmare.”

Kalani characterized their current situation: “We’re at a fork in the road now.”

“It’s either I’m gonna be a single mom and be with my kids,” Kalani explained.

She continued: “Or I’m gonna stay married to Asuelu.”

That said, the previews for next week make it look like Kalani will be pulled in one particular direction.