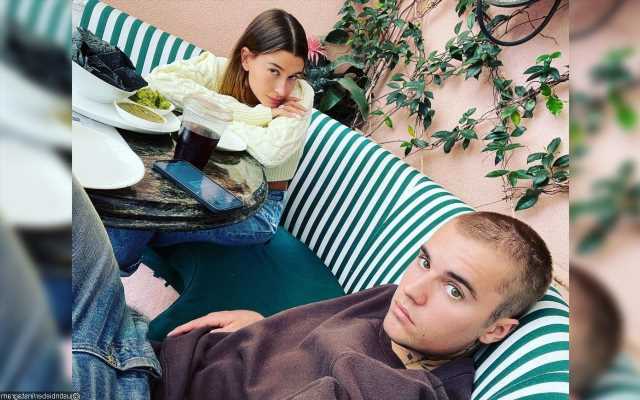 The ‘Love Yourself’ hitmaker finally takes his custom-made lavish car, which took three years to make and left him ‘in tears,’ for a spin with his model wife on the street.

AceShowbiz –Justin Bieber has turned heads with his luxurious car. During a date night with his wife Hailey Baldwin, the “Love Yourself” hitmaker took his custom-made futuristic Rolls Royce for a spin on the streets of Beverly Hills.

On Wednesday, June 9, the 27-year-old showed off his wildly custom lavish vehicle as he went out for dinner at Matsuhisa with his wife. For the date night, he rocked a freshly shaved head and sported a pale orange denim jacket with embroidery on the front. In the meantime, the model wore an oversized gray blazer with matching trousers. She was also seen styling her golden blonde hair into a chic bun. They were spotted on the way back home, pulling out of the parking lot in their extremely flashy whip, showing off the car in public for the first time.

Justin himself had to wait three years for his dream car to land in his garage. In a video uploaded by the West Coast Customs, a company that modified the singer’s car, on their YouTube channel in February, co-founder Ryan Friedlinghaus recalled the moment when the “Peaches” hitmaker sent him an image of a prototype Rolls Royce design three years prior. Unfortunately, Ryan later discovered upon contacting Rolls Royce that it was never intended to be sold.

Ryan then offered to make it up to Justin by using a black 2018 Rolls Royce Wraith. He and his team then began to assemble the vehicle, which had a “futuristic” feel. He highlighted the wheel covers as one of the main style points of the design, as he believed it makes “this car look like it’s floating when it’s driving.”

“When you think futuristic and you think of what would Rolls Royce build 25 years from now, you know, we’re hoping it’s something like this car,” Ryan explained. He also said that they designed the interior of the car to make it feel as if Justin was in a recording studio, with a high-tech sound system being built especially for it.

Elsewhere in the video, Justin was seen making his way to the West Coast Customs garage to be presented with his customized car and he was left stunned by the final result. As the “Yummy” singer looked in awe at the car, he knelt down on the ground and began to cry at the amazing sight in front of him. “The wheel cover is so smooth,” the Grammy-winning singer raved over his car. “I wanna take it for a drive.”