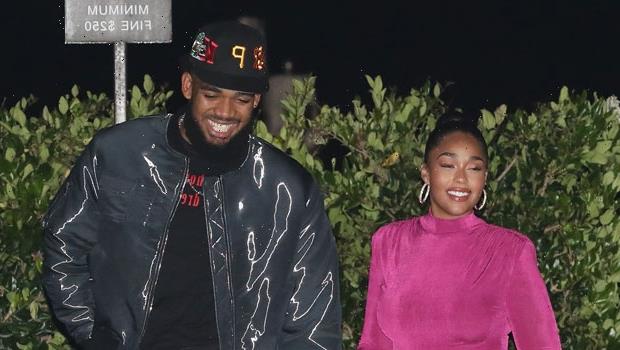 Jordyn Woods and Karl-Anthony Towns opened up taking their relationship to the next level during COVID-19, admitting they were ‘best friends’ for years before even sharing a kiss.

Jordyn Woods, 23, and Karl-Anthony Towns, 25, are absolutely adorable. The couple spilled some tea about their relationship on Jordyn’s Instagram series Regular-ish on Friday, Sept. 3 — including opening about how things took a romantic turn after being friends for years.

“Two years before, I’m like, ‘No, that’s like a brother to me,’” Jordyn recalled. “That sounds disgusting now I know,” she added as Karl chimed in laughing and noting that now “sounds crazy.” “Literally there was never a kiss or anything,” Karl confirmed. “I was just best friends. We had such mutual respect for each other.”

Karl explained earlier in the video that he met the FRSTPLCE Fitness founder through mutual friends. “Me and Jordyn met years ago knowing common people and just became friends,” the Minnesota Timberwolves player revealed. “And ever since then, our relationship grew where we became more than friends. I’m not saying in that way, but just best friends. And then we started having a deeper relationship.” During COVID-19, however, was when things took a turn: Karl lost his mother Jacqueline Towns to the deadly virus, along with seven family members.

Jordyn was there for him during the difficult time, which was when things took a turn. “It just so happened, the COVID came and kind of brought its challenges and it kind of forced us to either pick where our relationship was going to go as friends or something more,” the NBA star said. “And we chose the latter.”

After months of speculation, the two took their relationship Instagram official last September! Karl was present for a family vacation commemorating her 23rd birthday — aka her ‘Michael Jordan‘ year — and showered her with a number of luxe gifts, including an Hermès Birkin. “I think it’s kind of cool dating your best friend,” Jordyn said. “We know each other. We know each other’s hearts. We know each other on good days and bad days and we’ve been through a lot of bad days together.”

For the former Life of Kylie star, “timing” was key for the pair. “I felt like God was presenting us something that we just went with…And it happened to be something beautiful.” At the time, Jordyn had also been wading through the difficult public fallout related to Khloe Kardashian‘s on-again, off-again partner Tristan Thompson. She later confessed that Tristan unexpectedly kissed her at a house party during a Red Table Talk appearance with family friend Jada Pinkett Smith.