John Cleese explained he has performed at 36 shows on his latest tour in a number of countries across the world. His admission comes as the Monty Python actor urged his Twitter followers to not get a “divorce in California”.

The 82-year-old has been married four times with the comedy legend reportedly having forked out £25milllion in divorce settlements.

John, who is married to his wife Jennifer Wade, took to the micro-blogging site and admitted he felt he had been living in hotels in recent months.

The Fawlty Towers actor said he goes “wherever the work is” as the stand-up star is currently on a comedy tour.

In view of his 5.7 million followers, John explained he was off to the United States in the coming days. 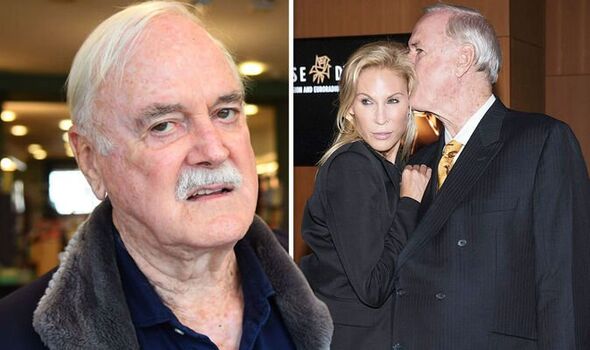 The veteran comic tweeted: “I live in hotel rooms, wherever the work is.

“Just performed 36 shows in Canada, the US, Portugal, Hungary, Spain, Germany, Italy, Switzerland and the Netherlands.

“Off to the US again on Thursday.”

He finished: “Don’t get divorced in California.” 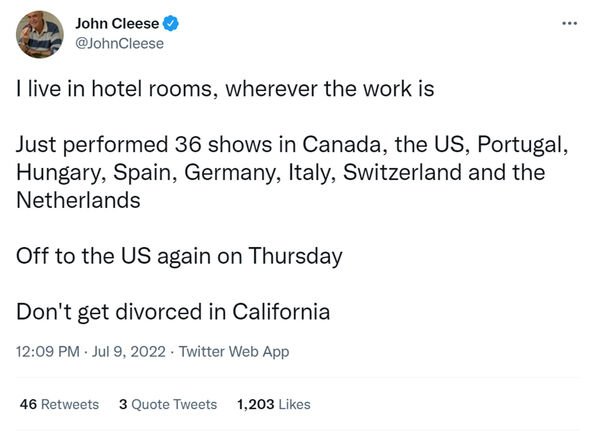 Twitter user, @Christhebuther said: “You have to rest more, John. Spend more time on Twitter and with checking your emails… (I sent you what I promised, on Tuesday, I think). Okay, I know, tweeting and emailing won’t pay your divorce.”

@Barrettpj62 quizzed: “Incredible stamina in your 83rd year but I thought you’d finished paying your ex off from the alimony tour?”

@LynneVero asked: “You really want to kick back in a tropical island paradise and never see us again?”

“How much longer do you have to pay alimony, or will it never end? I worry about you overworking,” wrote @Markrs75.

@VeldPark added: “John, your shows are good, but maybe you should retire now. Enjoy your life.”

John has previously opened up about his three divorces as he joked his ex-wives “cause of most of the misery in the world”.

During an appearance on the US chat show Conan O’Brien alongside his comedy partner Eric Idle, he opened up on marriage back in 2016.

“I have been married for 34 years. To four different wives,” he said before referring to his second wife Barbara Threntham, who died from complications with leukemia in 2013.

“One of my ex-wives died. You know what? It was very sad because it was the wrong one.”

Conan chuckled along with the actor and comedian before he asked: “Do you have any real anger or hatred towards your ex-wives?”

John, who is currently married to his fourth wife Jennifer Wade – who is 32 years his junior, took the opportunity to hit out at his former wives who are still alive – Connie Booth and Alyce Cleese.

He remarked: “No, I mean, I am quite happy if one or two of them would be dead. But I don’t have anything against them as people.”