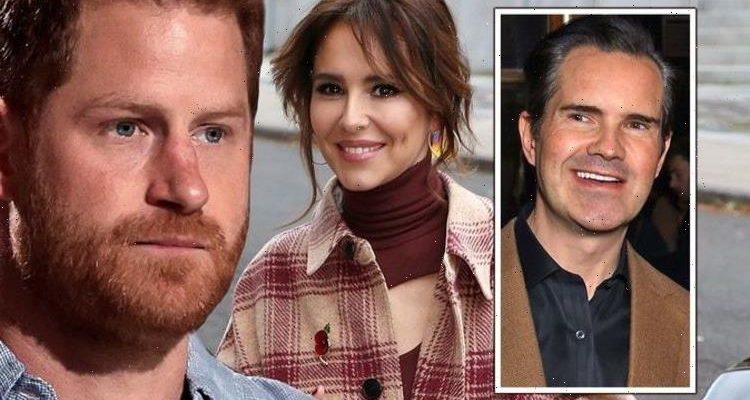 The comedian, 49, is back on TV tonight as he takes part in a celebrity special of ‘Who Wants to Be a Millionaire?’ on ITV. The funnyman will sit down with host and quizmaster Jeremy Clarkson as he tests his knowledge to try and win £1 million for charity. Jimmy will be joined on the programme by Team GB athlete Christine Ohuruogu and weatherman Alex Beresford.

Each of the trio will still have access to the show’s usual lifelines, including ‘ask the host’, ‘phone a friend’ and ‘50-50’.

While Jimmy is known for his withering put-downs of audience members, as well as other celebrities, the comedian has also revealed he has a softer side.

In a throwback interview on ‘The One Show’ last month, the comic recounted the time he once played matchmaker for Prince Harry when he was still a single man.

Jimmy was on the programme to promote his new autobiography and self-help manual, ‘Before & Laughter: The Funniest Man in the UK’s Genuinely Useful Guide to Life’.

In the book the comedian shares his personal advice, explaining how he made the transition from corporate drudgery to a life of laughter.

The comic told hosts Lauren Laverne and Harry Judd how he met the Prince at the Diamond Jubilee Concert in 2012 and suggested he get to know former Girls Aloud star, Cheryl.

The ‘Fight for This Love’ singer had been performing at the event, which was held on the Mall outside Buckingham Palace in celebration of 60 years of the Queen’s reign.

Jimmy said: “Prince Harry had just done this interview at the time saying, ‘Nobody wants to be my girlfriend, because no one wants the pressure.’

“Then I said to him that I had been teasing Cheryl all day saying that I’m going to match-make you two, would you mind coming over.”

The comedian went on to explain how Harry, who is now married to Meghan Markle had appeared up for the idea.

He added: “Course he had the last laugh, turns out there was a lot of pressure being his wife. I think Cheryl dodged a bullet there.”

Meghan and Harry stepped back from their roles within the Royal Family last year and moved to North America.

The Duke and Duchess of Sussex eventually settled in Montecito, California, where they are raising their two children, Archie Harrison, two, and Lilibet Diana, five months.

The couple were introduced by a mutual friend for a blind date in 2016, several years after Harry met Jimmy at Buckingham Palace.

The comedian also opened about his encounter with the royal on the programme, ‘Alan Davies: As Yet Untitled’ in 2014.

During the roundtable chat, he was asked by the host about the time he attempted to pair up Harry and Cheryl.

He said: “There was a big party in the Palace afterwards, it was such a bizarre day.”

The comic explained that he had “bumped into” Harry “almost immediately” at the party.

He added: “He’d done this interview the week before where he’d gone ‘I sort of can’t find love.

“‘It’s really difficult for me because no woman wants to buy into this incredibly difficult lifestyle of being in the Royal Family’.

“I said, ‘Oh, yeah, because we women famously don’t want to be princesses.”

Jimmy said Cheryl told him not to “embarrass” her by introducing her to Harry but added that the Prince was “really charming and nice” about it.

‘Who Wants to Be a Millionaire?’ airs on ITV from 9pm-10pm.
Source: Read Full Article