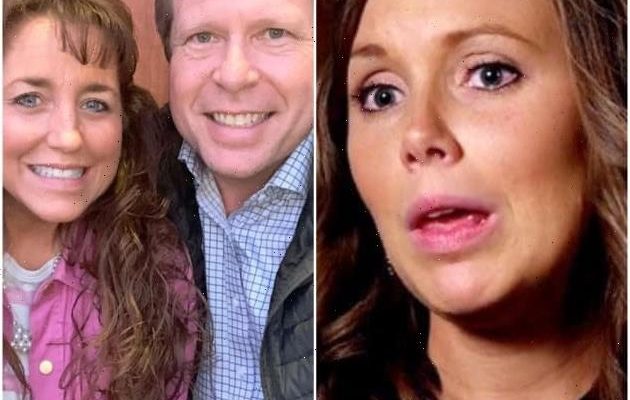 In a federal courthouse in Arkansas this week, Josh Duggar was sentenced to 12 and a half years in prison.

News of the sentence came almost six months after Josh was convicted on child pornography charges.

Several members of the Duggar family came out to support Josh at the hearing, just as they had throughout his trial.

Among them, as always, was his long-suffering wife, Anna Duggar.

Moments later, however, she appeared to fight back tears as she made her way out of the courthouse.

Despite reports that Anna has considered divorcing Josh, it seems that she has every inention of waiting for him as he completes his lengthy sentence.

“Anna wasn’t shocked. She is relieved that it’s over though. Now comes the hard decision, whether to stay and wait for Josh to come out or start her life over without him,” a source close to the situation tells In Touch.

“Some of her kids will be grown with possibly children of their own by the time their dad gets out.”

Josh was cuffed and hauled off to jail the moment that his verdict was announced back in December.

But now, he’ll be serving his sentence in the federal prison that will serve as his home for the next 12 years.

“Everyone feels sympathy for Anna, she’s been living in a bad dream, and she needs a wake-up call,” the insider continued.

“I’ll tell you one thing though; Josh’s nightmare is about to get worse.”

As for Anna, she’ll likely be moving into a new home of her own.

Jim Bob and Michelle have reportedly invited Anna and her seven kids to “stay with them” inside the infamous Duggar compound.

Anna and the kids had been living in a sort of makeshift house on the Duggars’ property.

As a mother of seven with no real-world job skills, she’ll be reliant on Jim Bob and Michelle for financial support no matter where she lives.

But co-habiting with her in-laws might be step too far for Anna, especially amid reports that she fought with Jim Bob and Michelle during Josh’s trial.

“It will be interesting to see what she decides to do,” says the insider.

Meanwile, Amy Duggar has also offered Anna a place to live, but you can be certain that Anna won’t be taking her up on that.

Amy celebrated when Josh was convicted, and she’s been openly encouraging Anna to part ways with her predatory husband.

“That’s just fear. That’s just literally fear of like what to do next, you know? And heck, I hope she’s OK.”

Anna says she has made efforts to contact Anna and has tagged her in Instagram videos in which she speaks out in favor of Josh’s victims — including his wife.

Not surprisingly, it seems that such content has failed to capture Anna’s attention.

We’ll have further updates on this developing story as more information becomes available.