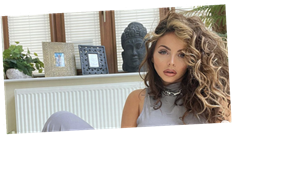 The 29 year old star showed off her style with her enviable locks flowing in large curls down past her shoulders.

Sporting a glamorous makeup look, the singer accentuated her outfit with a silver chain necklace and white trainers.

Jesy shared the beautiful picture with her seven million Instagram followers with the caption: “Happy Easter weekend you lovely lot,” followed by a bunny emoji.

Fans were quick to gush over Jesy’s new photo, with one writing: “YOU ARE SO FIT,” and another added: “You’re amazing and so beautiful” and a third said: “You’re so so gorgeous I can’t.”

Jesy’s stylish snap comes after the star hinted she’s split from Our Girl actor Sean Sagar after the pair unfollowed each other on Instagram. The pair reportedly rekindled their romance last month after briefly breaking up in January, but it now appears the Little Mix star has called it quits once again.

While the pair had recently been ‘liking’ each other’s Instagram photos, they removed each other from social media last week.

It comes after the singer’s pals had expressed their concerns about the relationship, according to reports. It was claimed that Jesy, who appears to be working with Little Mix producers on new solo music, moved Sean into her home ahead of the third UK national lockdown and the duo had been quarantining together.

A source told Heat magazine: "Everyone is worried about Jesy right now.

"She's taken Sean back quite quickly, and lockdown has meant that they've rushed into living together.

"Obviously, there was a reason why they broke up but she's assured everyone that it was a misunderstanding and says it's now water under the bridge.

"She says Sean makes her feel safe and that she can't handle being alone right now," the insider continued. "But some of her friends have asked if she's doing the right thing by moving him into her home. They feel she needs a bit more breathing space."

Back in January, the former Little Mix band member sparked rumours of a split after she deleted all traces of Sean from her Instagram.

In turn, the Our Girl star also removed all of his pictures with Jesy from his own Instagram page. However, the pair remained following each other.