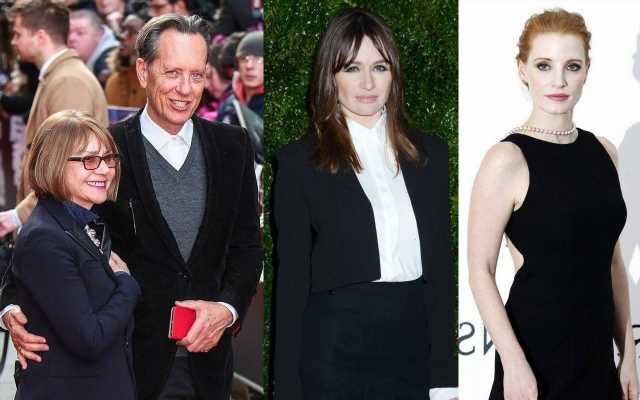 A number of Hollywood stars are quick to send condolences and prayers to Richard E. Grant and his family as they are mourning the death of matriarch Joan Washington.

Chastain remembered the “profound impact” Joan, 71, a voice coach with nearly 40 years’ experience working in the film industry, had on her.

On Friday she tweeted, “My heart is broken. Joan Washington had such a profound impact on me, yes as an artist, but mostly as a woman,” she wrote alongside a sweet photo of her on set with Joan.”

“I’ve looked toward her. Her strive towards excellence made her the celebrated dialect coach she was (sic).”

“Every day I was excited to go to work and giggle with Joan. She was a barometer of truth with a wicked sense of humor. I loved her very much.”

“The way she celebrated her family has been very meaningful to see over the years. My heart goes to her beloved Richard and Oilly (daughter Olivia). You were always her North Star. (sic)”

Musical theatre veteran Elaine Page added her own tweet on Friday, writing, “It’s heartbreaking to hear of Joan Washington’s passing. She was special both as a teacher & as a friend. Never to be forgotten. My deepest sympathy to Richard & all the family.”

Actress Emily Mortimer shared her condolences on Grant’s Instagram page, commenting, “I can’t believe this sad news. Sending so much love to you both. And thinking of you so much. Joan was incredible. One of the world’s great teachers. It was a privilege to know her and have been in her orbit. And your guys’ love story is just an inspiration.”

The outpouring of emotion followed Richard’s sad announcement as he shared a video to Twitter on Friday of the pair dancing and laughing together to The Platters track “Only You”.

They married in 1986 and welcomed daughter Olivia together three years later while the actor is also stepfather to Tom from Joan’s previous relationship.

“ONLY YOU! Joan – Love of my Life & Giver of Life to our daughter Olivia,” he captioned the sweet clip.

“Our hearts are broken with the loss of your Life last night. 35 years married & 38 together.”

“To be truly known and seen by you, is your immeasurable gift. Do not forget us, sweet Monkee-mine (sic).”

A cause of death has not yet been revealed.