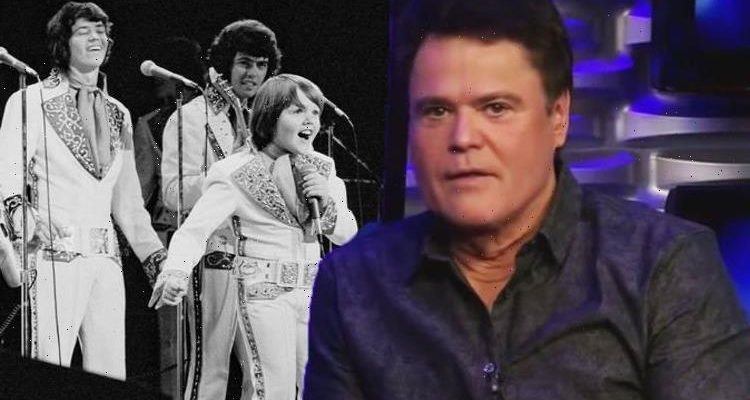 Jennifer Saunders sings to Donny Osmond on The One Show

Donny Osmond, 63, has admitted that when he “lost” his career in the 80s it was a “horrible” experience. The Donny and Marie star felt “rejected” by fans who had outgrown him and he went from selling out stadiums to “playing half-filled high school gymnasiums”.

“I can’t find the words to tell you what the feeling was of being rejected after selling out stadiums and all this stuff and then playing half-filled high school gymnasiums. I mean, it’s just horrible.”

Osmond recalls feeling unwanted and having anxiety for the first time.

His career drastically improved in 1989, when he had a hit with the song Soldier of Love, which soon had him playing standing-room-only venues and that was only part of his comeback.

He was cast as the lead in a stage production of Joseph and the Amazing Technicolor Dreamcoat, a role which he played from 1992 to 1997.

“You’d think that that would fix anything right?” Osmond said.

“It did just the opposite because now, I’ve gotta be perfect, because, if I’m not, I’m gonna lose it again.”

He recalls having a panic attack one night just before he was supposed to go on stage.

“They called half-hour to showtime. My hands started getting clammy. 15 minutes to show time, they announced, and I started shaking,” Osmond remembered.

“Finally, about 10 minutes before the show, I’m throwing things in my dressing room. I said, ‘Get the understudy… get him ready, cause I can’t go on stage,’” he added to Yahoo.co.uk.

Recently Osmond revealed he was temporarily paralysed after contracting an infection following back and neck surgery in 2019.

The star opened up about the recovery battle he had to undertake in order to return to the stage for his Las Vegas residency.

Speaking to the Mirror, the pop icon explained that he first went under the knife after discovering his spine had shifted due to a dancing injury he’d suffered during his career.

Things came to a head in November 2019 in the final performance of his residency with sister Marie, when the star found himself unable to move.

Donny stated: “I couldn’t feel my arms, then suddenly my legs too. I didn’t tell anyone what was happening to me… I just kept dancing and finished the show.”

The surgery for his injury ended up leading to further health woes after he contracted a secondary infection.

The Soldier of Love singer explained: “I thought everything was going to be fine, but it couldn’t have been worse. I got a secondary infection which meant I wasn’t able to move.”

The entertainer had feared he would never walk again as he added: “But I just didn’t take no for an answer.”

He willed himself to make a full recovery as he endured months and months of rehab to try and get on his feet while using a walking frame.

To the delight of the hitmaker, his family and fans, he recently returned to Vegas for his residency at Harrah’s Showroom.