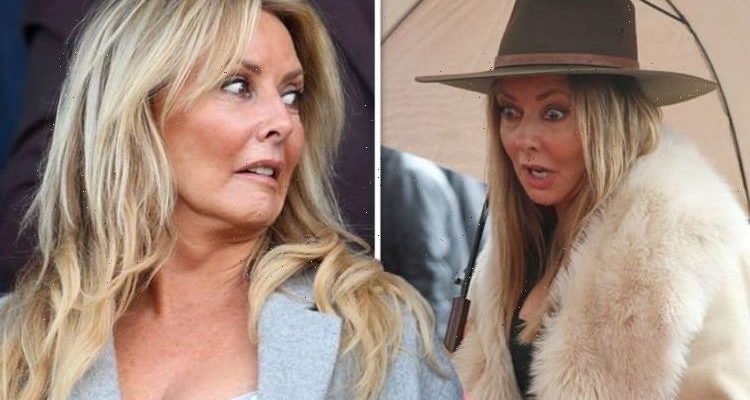 Carol Vorderman spoke candidly on BBC Radio Wales alongside her co-star and former Welsh international Ian Gough today. The Countdown star urged listeners to share details of when they won competitions during their childhood.

The 60-year-old took a trip down memory lane as she recalled the moment things went wrong after taking part in a Donkey Derby.

It comes after a listener messaged into the programme and shared they remembered winning a number of Donkey Derby’s in their younger years.

Unfortunately, the mathematician confessed she didn’t experience the same outcome.

“We used to have one of those in Denby every year,” Carol recalled.

“I remember as a teenager and I thought I was really cool. I thought, ‘I’m going to get on this donkey… I’m going to win this.'”

She continued: “I can remember it crashing through the jumps which are hay bales.

“I fell off and this boy that I fancied was standing by the fence where I’d fallen.”

Carol finished: “I was mortified.”

The derby is a race in which contestants compete against one another as they ride a donkey.

It is not uncommon for Carol to share details from her childhood growing up in Wales.

Meanwhile, the radio broadcaster was joined on her show with Queen legend Brian May.

Speaking to her Twitter followers, she revealed that she knew Freddie Mercury was a fan of Countdown, but not Brian.

She spilled: “I just finished doing an Instagram live video with the lovely Brian May. Oh, I love him, I’ve always loved him.

“He was saying that they all used to watch Countdown back in the day.”

Stunned by the revelation, she added: “I didn’t know he did, but I knew Freddie Mercury did because he used to write in.”

The broadcaster was also praised for her latest look as the age-defying beauty sported blonde hair.

Carol went make-up free as she smiled for a selfie to show off her new tresses.

Fans were quick to comment on her look, with many loving it.

“Stylish as ever honey,” another commented.