In 1957, author Frank Herbert traveled to the Oregon Dunes on a reporting assignment. He wrote on the use of grasses to slow the movement of the dunes, prevent them from spreading, from taking over. The image of dunes engulfing entire cities, of prophets and ecologists rising from such a world, incited years of religious and ecological research, all of which culminated in perhaps the most influential space epic of all time: Dune.

The ecological/fantasy epic/sci-fi (?) concept grew faster than unimpeded dunes and would go on to comprise six door-stopping novels, and then, after Herbert’s death in 1986, some 18 prequel novels authored by Herbert’s son, Brian Herbert, and Kevin J. Anderson. There are also short story collections and illustrated books.

The recent Dune film adaptation, directed by Denis Villeneuve, covers just part (part!) of the very first (just the first!) novel. So if you’re impatient for Villeneuve’s sequel—and who knows when (or if) that will come out—your journey into the world of Dune has only just begun. Like, really: you’ve got literally thousands of pages left to go.

While the novel series moves backward and forward in time, we prefer sticking with a reading order based more on the chronology of publication rather than world building.

That means we recommend reading the full collection of Herbert’s work first, and then going back to the very beginning to fill in the gaps, if you’re still interested. This way you experience the author’s sustained vision before embarking on sidequests and downloadable content. While some may argue those sidequests give us valuable insight into characters Herbert swiftly introduces and then kills off, it seems ridiculous to recommend reading over a dozen novels and short stories before getting to what really started it all—the first and most famous (and probably the best) work in the entire series.

Gaps don’t necessarily imply plot holes, and you can read all six of Herbert’s original novels without needing recourse to information outside the text.

Here’s how to read all the Dune books in order.

Start with the original series 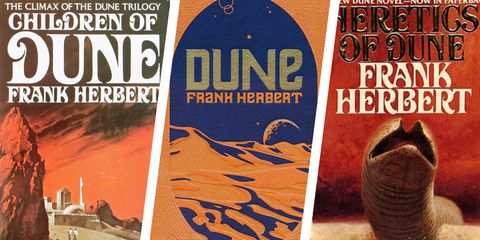 These are the six works by Frank Herbert and span some fifteen hundred years.

From here you can choose how to fill in the gaps. You can (1) go back to the very beginning, thousands of years before Dune (1965) and read up until that first novel. You can (2) continue chronologically after the events of Herbert’s original series. Or you can (3) read about the interstitial moments, taking place during and in between all the books above.

Everything that comes before the originals

This is the chronological order of events starting from the earliest and ending just before the events of the original Dune.

“The Faces of a Martyr” (Tales of Dune)

The Battle of Corrin

The Duke of Caladan

The Lady of Caladan

The Heir of Caladan (forthcoming)

Everything that happens during and in between the originals

“A Whisper of Caladan Seas” (Tales of Dune)

“The Waters of Kanly” (Infinite Stars)

The Winds of Dune

Everything after the originals

“Treasure in the Sand” (Tales of Dune)