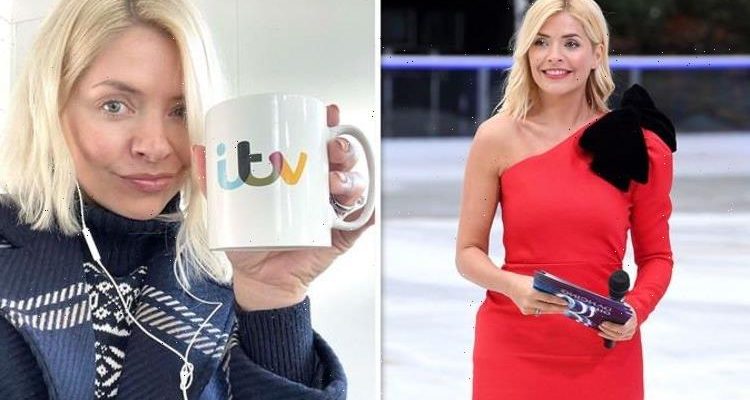 Dancing on Ice presenter Holly Willoughby stunned fans this afternoon with a gorgeous make-up free selfie as she prepared for opening night. Now in its 14th series, Dancing on Ice will be welcoming a host of new celebrities to the rink as they compete for the trophy.

Holly, 40, shared a casual snap with her 7.5 million Instagram followers as she reminded them to tune in to ITV later tonight.

The This Morning star could be seen rocking a navy blue and white patterned coat with a matching turtle neck jumper underneath.

In one hand she held her ITV mug, which she lifted in the hopes of drawing more attention to the channel.

In the caption, Holly wrote: “Waiting backstage for @dancingonice rehearsals to begin…

“Just in case you’re wondering what channel we’re on tonight… @itv,” she added with a blue heart.

“Oooh I want that coat! Where’s it from? X,” asked timehairbeauty.

‘Who am I?’ Brian May sparks concern with cryptic post [INSIGHT]

Holly presents Dancing on Ice alongside her This Morning co-host Phillip Schofield.

The pair first started hosting the skating-based competition together all the way back in 2006, before they earned a permanent spot on the This Morning sofa in 2009.

This year judges Jane Torvill and Christopher Dean will once again appear on the Dancing on Ice panel as, like Holly and Phillip, they have been with the show since it aired.

They will be joined by returning judge and Diversity star Ashley Banjo, as well as new judge Oti Mabuse.

Oti rose to fame after her stint as a professional on BBC’s Strictly Come Dancing, which she won for two consecutive years in a row in both 2019 with Kelvin Fletcher and in 2020 with Bill Bailey.

The dancer will be replacing former judge John Barrowman on the panel.

Dancing On Ice begins tonight at 6.30pm on ITV.