Season two of Outer Banks just released and you know what that means? More cliffhangers, mysteries, and murder.

This Netflix drama focuses on a group of teenagers called “the Pogues” who are searching for a century-lost treasure. But they’re not the only ones on the small island looking for the gold. And the enemies they’re fighting against? Well, let’s just say, they’re more than willing to fight tooth and nail for it.

Season two picks up exactly where season one left off with Sarah and John B. heading to Nassau, Bahamas where the gold is stashed in Sarah’s family vacation house. The rest of the Pogues—JJ, Kie, and Pope—are still under the assumption that their friends perished in the hurricane and begin to start the new school year in mourning.

After landing in Nassau, John B. and Sarah work with Captain Terrance, Stubbs, and Cleo to retrieve the stolen gold from her family’s house. Of course, with this being a TV show, shit goes awry. Does the group get the gold? Surprisingly, yes. But only at the cost of Sarah, who suffers a gunshot wound from her brother, Rafe. A classic cliffhanger.

You’d think that a main character wouldn’t be killed off early in the season. But never say never with Outer Banks. Does Sarah succumb to her wounds? Or, does she, surprisingly, make it out alive? Read on to know the fate behind Sarah Cameron. 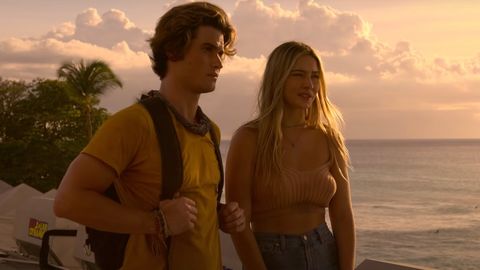 Yes and no. After Sarah realizes she’s shot, she and John B. head to an under-the-table doctor recommended by Captain Terrance. The doctor tries to save her but the blood loss is too much for her body and she sadly flatlines.

Unable to accept her death, John B. repeatedly performs CPR until a sudden miracle happens: Sarah awakens from the grasp of death. She then gets off the operating table (as if she didn’t just die for a second?) and heads back to the mission—retrieving the gold and heading back to Outer Banks. No one can say Sarah isn’t resilient.

If you think this small moment in season two shocked you, prepare to be on the edge of your seat for the remaining episodes.