Bob Hawke was by far the favourite character Max Gillies played – audiences loved him. The impersonator best known for The Gillies Report, in which he caricatured the likes of Joh Bjelke-Petersen, Malcolm Fraser and Kerry Packer, recalls a character rich for the picking.

"He gave you so much – it was all out there. That was one of the things that was part of his appeal… his naked, emotional honesty," he says. "He was like the weather, you could get a storm in a minute and a calm spring day the next. He'd be all smiles but he could be grumpy and cantankerous. You got the lot." 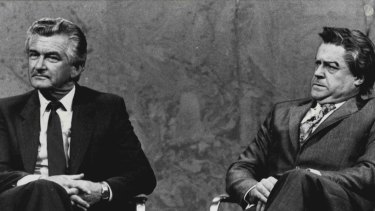 Then-prime minister Bob Hawke and his double Max Gillies on the set of Parkinson in 1983. Credit:Pearce/Fairfax Media

"That was certainly the first time I can remember someone using the vernacular, everyday speech – we call it larrikin now but at the time it was down to earth, the natural language of the people."

Gillies recalls listening to Question Time and hearing a politician with a very proper, plum-in-the-mouth accent ask a question. "Hawke as prime minister answered the question by mimicking him. I can remember the shocked silence – you could've cut the silence with a knife. That's when I realised mimicry used in the right place can be a dangerous weapon."

The two first met at the ABC during Hawke's second election campaign. "He was buggered. He wasn't a young man, he looked ashen. He came over and said he'd seen the first show of [The Gillies Report] and he said he didn't think I'd cracked it but then said, 'I've heard that you've improved'." 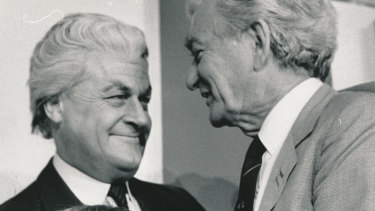 Gillies says Hawke gave as much physically as he did verbally. "He was touchy-feely – as Bill Shorten complained lately about Morrison being a space invader – Hawke had no compunction about closeness to other people. He was very tactile and if there was no other person to be tactile with he'd stroke himself, running his fingers through his hair or playing with his ring finger."

"In every short piece he went through the gamut of emotions really … he couldn't disguise his emotions if he tried. Nobody else gave you that much to work with."

According to Gillies, Hawke's timing was always impeccable, to the very last. "Not that anyone has a choice about when they pass but to his last breath and last action, he was working for the cause."