The Australian comedian teed off on Ted Sarandos, the streaming giant’s co-CEO, after he brought her name into the conversation about how Netflix is “working hard to ensure marginalized communities aren’t defined by a single story.”

Sarandos said, “So we have ‘Sex Education,’ ‘Orange Is The New Black,’ ‘Control Z,’ Hannah Gadsby and Dave Chappelle all on Netflix. Key to this is increasing diversity on the content team itself.” 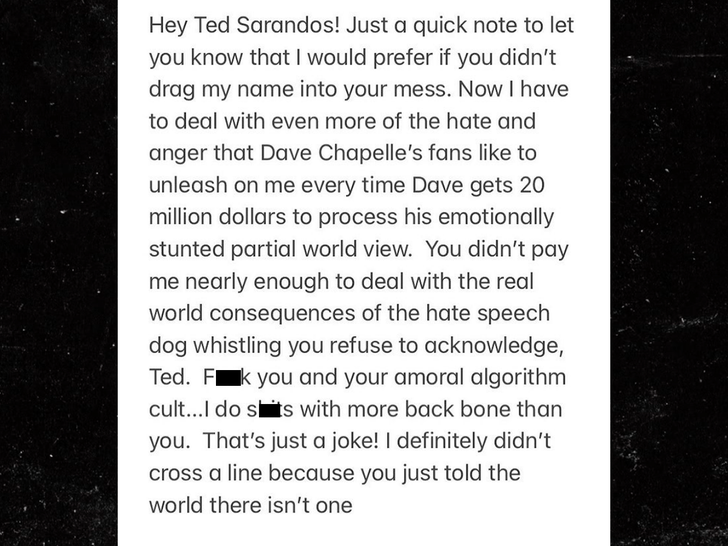 Hannah’s reaction to Ted is basically … keep my name outta your mouth, and she’s hurling a few jabs at Dave too. Hannah says, “Hey Ted Sarandos! Just a quick note to let you know that I would prefer if you didn’t drag my name into your mess. Now I have to deal with even more of the hate and anger that Dave Chappelle’s fans like to unleash on me every time Dave gets 20 million dollars to process his emotionally stunted partial world view.”

Hannah gained a lot of popularity following her 2018 Netflix specials, “Nanette” and “Douglas” … but clearly didn’t get Chappelle dough.

Hannah adds, “You didn’t pay me nearly enough to deal with the real world consequences of the hate speech dog whistling you refuse to acknowledge, Ted. F**k you and your amoral algorithm cult…I do s**ts with more back bone than you. That’s just a joke! I definitely didn’t cross a line because you just told the world there isn’t one.”

Hannah also noted — for Chappelle fans, we presume — that she’s watched all of “The Closer” and added, “Leave me alone.”