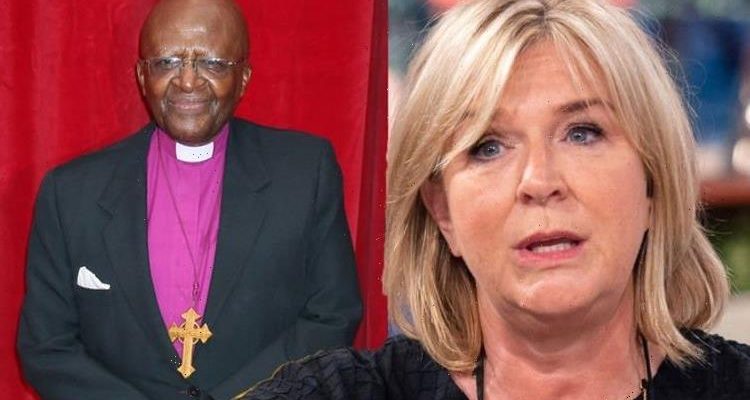 Fern Britton, 64, met Archbishop Desmond Tutu 10 years ago and has shared the story on Twitter to commemorate the late hero. He was diagnosed with prostate cancer in the late 90s and in recent years was hospitalised on several occasions to treat infections associated with his cancer treatment.

So human, funny and kind.

In view of her 98,700 Twitter followers, Fern shared the story of the pair’s surprising interaction, during which Mr Tutu shared a box of chocolates with her.

She penned: “I had the joy of meeting #ArchbishopDesmondTutu about 10 years ago.

“So human, funny and kind, he let me see his room filled with an archive of his life. Passports, awards, letters….

“And while I was there he shared a box of Ferrero Rocher chocolates with me. True.”

Many social media users took to the comments to share their stories while paying tribute to the late hero.

Johnh1509 said: “I had the great good fortune to meet the Archbishop when he came to Birminhgham in 1989.(sic)

“He approached me and said ‘has anyone ever told you that you look like Ian Botham?’

“That led to a ten minute conversation about cricket. Much to the annoyance of the dignitaries. Great man.”

Curly4 added: “What a wonderful memory, it’s a sad day.”

Johnsivorn commented: “Seeing the good in people is a gift. Thank you for sharing.”

Desmond was one of the driving forces behind the movement to end the policy of racial segregation and discrimination enforced by the white minority government against the black majority in South Africa from 1948 until 1991.

He was awarded the Nobel prize in 1984 for his role in the struggle to abolish the apartheid system.

Desmond’s death comes just weeks after that of South Africa’s last apartheid-era president, FW de Clerk, who died at the age of 85.

He preached against the tyranny of white minority and even after its end, never wavered in his fight for a fairer South Africa.

In his final years, he regretted that his dream of a ‘Rainbow Nation’ had not yet come true.

On behalf of the Tutu family, the Office of the Archbishop of South Africa said “he died peacefully at the Oasis Frail Care Centre in Cape Town this morning”.

They did not give details on the exact cause of his death.

Condolences to the late Archbishop have poured in this morning following the announcement.

Boris Johnson said: “I am deeply saddened to hear of the death of Archbishop Desmond Tutu.

“He was a critical figure in the fight against apartheid and in the struggle to create a new South Africa – and will be remembered for his spiritual leadership and irrepressible good humour.”