KimKardashian West loves showing off photos of her kids on social media. TheSkims founder is a mother of four, and she’s been staying at home with her childrenmore than ever now that the coronavirus has made its way around the world.

Kardashian West recently posted a photo of North and Chicago alongside their father, Kanye West, and fans are convinced that North is going to be a “problem” when she’s older. 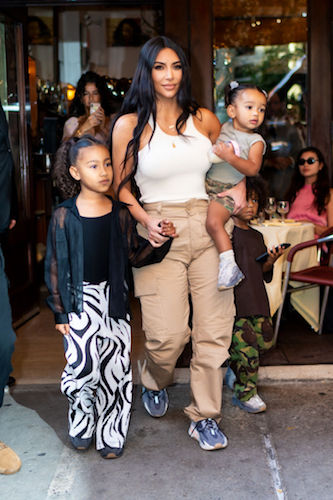 Kardashian West has known rapper Kanye West for years, butthings weren’t always romantic between the two. They were only friends atfirst, but when Kardashian West was going through her second divorce with NBAplayer Kris Humphries, things transitioned from friendship to romance.Kardashian West started dating her now-husband before her divorce was evenfinalized, and the two welcomed their first child, North West, in 2013.

Since then, the West family has expanded to four kids, two of whom were delivered via surrogate after Kardashian West dealt with complications during her first two pregnancies.

What is everyone doing to keep your kids entertained??? As a family we are social distancing but need some fun ideas of what to do! Any suggestions would help!

Kardashian West loves showing off her kids on social media

The Kardashian-Jenner family is compiled of some of themost-followed women in the world. And Kardashian West has a whopping 169million Instagram followers. She loves showing off her little kids, and sheoften captures some of the hilarious moments her toddlers have. Fans love tosee the photos and videos she posts, though some have recently accused her of usingher kids to seem more relatable.

Kardashian West recently posted an adorable photo of Kanye West sitting in between his two daughters, North and Chicago. And fans couldn’t help but notice what a “gorgeous baby” Chicago is.

“Chicago is the new supreme,” someone wrote. “It’s Chicago for me… So pretty,” someone else added. “Chi is going to be a problem when she’s older,” another person wrote, suggesting Chicago would only continue to grow into her looks. “Whenever I see a pic of her I gotta [sic] stare bc she is just a gorgeous baby!” another comment read. Fans often dote on Chicago, suggesting that she looks just like her mother and that she’s Kardashian West’s cutest child.

Kardashian West said she might not have any more kids

Despite the adorable photo ops, Kardashian West has said that she might not have any more children. She recently opened up about her family on Laura Wasser’s “All’s Fair” podcast, where she said that she thinks she’s too busy to handle any more children. “I could do two more, but I just don’t think I should,” she said, according to People. “I just can’t do more ’cause I really want to go to school and I really want to do all this stuff.”

Kardashian West currently runs several businesses, cares for four children, and is taking law classes — and it might be too much to have even more children. But the beauty mogul hasn’t totally ruled it out.