Drake’s son Adonis was a ball of energy as he playfully crawled all over his dad alongside another kid as they rocked Christmas PJs!

Drake, 35, has his hands full with son Adonis! The adorable 4-year-old hilariously had his dad trapped as he and a friend crawled all over the Scorpion rapper in a black-and-white video posted to Instagram on Christmas Day. The rare clip of the toddler was posted by doting dad Drake — née Aubrey Graham — who shed his usual serious image for the sweet family moment.

“Oh my god,” the Toronto born rapper can be heard mumbling as he gives the camera a struggling look, rocking a white t-shirt under a Nike branded jersey. The other child can he heard saying, “Adonis, you are so mean!” through laughs as the children continued wrestling each other while sitting on Drake’s back. “I gotta get out of of this! I gotta get outta this!” Drake then declared, as he demonstrated his strength by standing up with the two pajama clad kids on his back, growling.

Adonis, looking festive in his star printed sleepwear, then took a small tumble down on the bed as he rolled off his dad. “Oh my god!” Drake added as he caught the 4-year-old whom he shares with Sophie Brussaux, both laughing hysterically throughout the ordeal. Merry Christmas From The Gang,” he captioned the rare post, adding crossed fingers and a sparkling heart emoji. Notably, the Degrassi alum was also raised celebrating Hanukkah via his Jewish mother Sandy Graham. 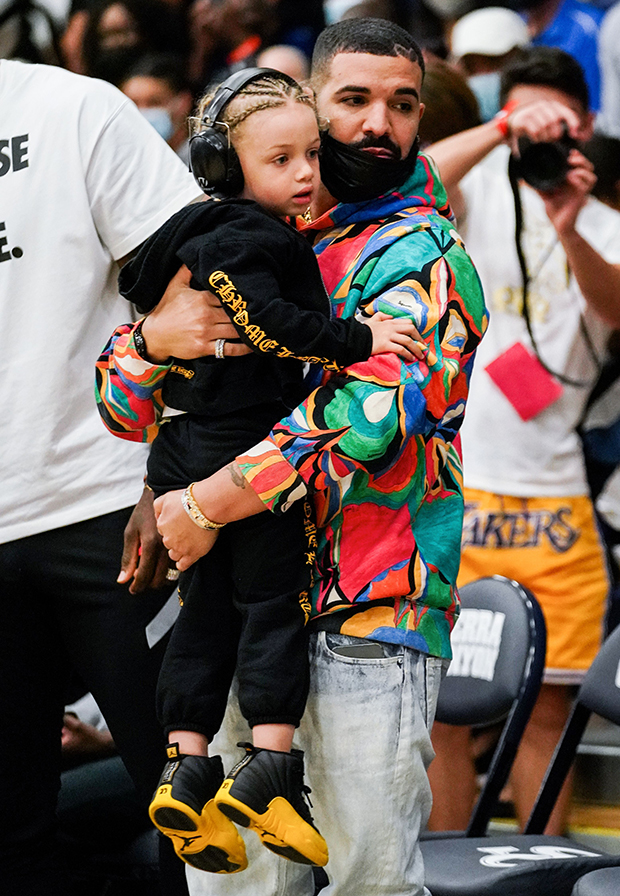 Drake — Photos Of The Grammy-Winning Rapper

Several of Drake’s buddies got in on the comments, showing the star plenty of love. “Merry Christmas To The Whole Fam Bro,” Kid The Wiz wrote, while Chance The Rapper, Tiesto and producer boi1da just left simple heart emojis. “Gotta run from those 2,” Preme penned.

While the Euphoria producer rarely gives interviews, he did open up about fatherhood in an interview with friend Lil Wayne on Apple Music’s Young Money Radio last year. “[Fatherhood is] great for me,” Drake said in May 2020, going on to talk about confirming the news of his son on his 2018 album. “It was great to just share that with the world. I just woke up one morning and I was like, you know what? This is just something that I want to do…I want to be able to go places with my son and share memories with my son. I don’t want to feel like just because of a life choice I made to be a celebrity that I got to make everybody live under this blanket,” Drake also said.