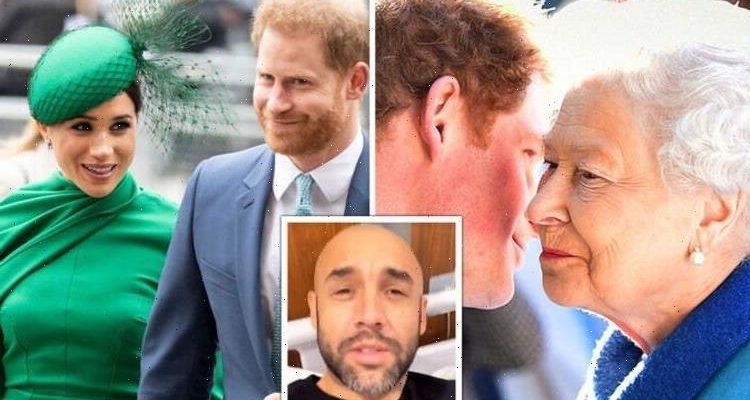 Meghan Markle and Prince Harry paid a visit to see the Queen as they stopped in the UK ahead of their appearance at the Invictus Games which will be held in The Netherlands. The Duke and Duchess of Sussex also met with Prince Charles who was also at Windsor Castle for the Maundy Thursday Service yesterday.

A spokesperson for Meghan and Harry confirmed that they visited the Duke’s grandmother, as Harry said he had hoped to do.

The couple stopped in on their way to The Hague to attend The Invictus Games.

Details about their visit have been reported with many eyewitnesses claiming to have spotted the pair.

Good Morning Britain presenter Alex Beresford, 41, praised the couple and explained their visit was certainly the “best step in the right direction”.

But the weather forecaster has suggested he need not hear about the details of the visit.

Taking to Twitter today, Alex spoke out about the couple and has often been vocal about his admiration for Harry and Meghan.

In view of his 247,000 followers, he penned: “I don’t care for the details, just happy that it happened and this could be a step in the right direction #HarryandMeghan.”

Twitter user, Yvonne mused: “Probably not the first time this has happened. Only this time they were spotted.”

Sir Will I Really remarked: “In many ways, this will have meant far more to The Queen. So personally I think it’s the right call… (I’m sure Piers will be spitting feathers but who cares).”

Trudy Smart added: “Absolutely agree, they’re family, at the end of the day.”

Visitors at Windsor Castle attending the Maundy Thursday Service saw the couple, with one eyewitness saying Harry and Meghan “waved at everyone on the bus”.

They said: “I couldn’t believe it when I saw who it was. We waved and they waved back.

“They looked happy and relaxed and waved to everyone on the bus.

“Charles and the Queen were at Windsor Castle at the same time so they must have met them both.

Speaking to the Sun, the eyewitness added: “It was quite the sight.

“We knew we might see Charles and the Duchess of Cornwall at the ceremony but never believed we would bump into Harry and Meghan.”

The news comes after Meghan and Harry sparked backlash for their decision to not attend Prince Philip’s memorial service in March.

The service, which took place on March 30 at Westminster Abbey, saw around 1,800 people attend.

A spokesperson for the Sussexes confirmed that the couple would not be present at the event but did not give an explanation.