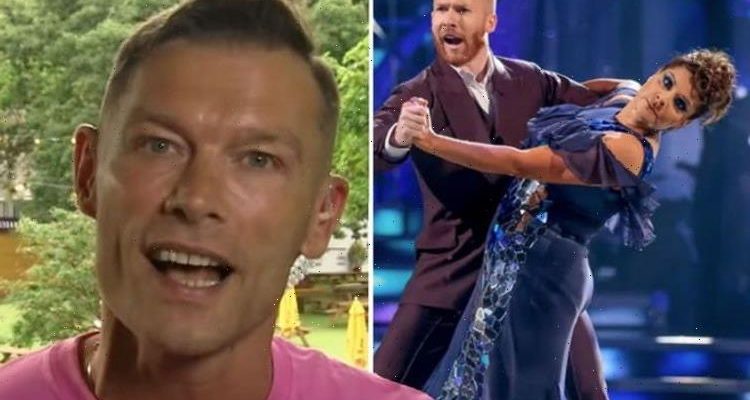 Nina Wadia, 52, and Neil Jones, 39, were the first Strictly Come Dancing duo to be given the boot from the BBC competition this year. The EastEnders star was praised by viewers after giving it her all in an energetic Samba routine which earned her 24 out of 40 points.

Despite the pair’s best efforts, Nina’s time came to an end after just one dance as judges saved Katie McGlynn and Gorka Marquez in the dance off.

Speaking to Express.co.uk, John Partridge, who played her son-in-law Christian on the soap, said the decision left him “fuming”.

“I was really gutted for her because she loves it, she loves to dance and she really wanted to learn.

“When she got her first dance I was like, ‘Oh come on, it is the toughest one’.

“It was the luck of the draw and I was really really gutted for her.”

The actor went on to say he missed the first live show, but called Nina as soon as he realised she was out.

“I was like, ‘Mum what happened?!’ I called her up straight away and said, ‘I’ve not even seen your first performance yet and you’re out’.”

He joked: “I was like, ‘Did you learn nothing from me in the five years we worked together? Did I teach you nothing?’

John was referring to his dancing talents which can be seen as part of Proud Caberet’s All Stars show this month.

Before joining EastEnders, he was one of the cast members in Andrew Lloyd Webber’s musical Cats.

The actor initially trained in ballet at the Royal Ballet Lower School and went on to star in the television adaptation of Stan Barstow’s novel A Kind of Loving in 1982.

Due to his dance background, the actor said he would rule out a chance to appear on Strictly Come Dancing himself.

“I think I may have an upper hand there, I think they may think, ‘Maybe not’, because obviously I have a dance background.

“It’s something I still do and do well.

“In America they don’t really mind about things like that, but in this country, we like to see people who go on that programme without that sort of background.”

He went on to praise the programme for representing same-sex couples such as John Whaite and Johannes Radebe.

On the topic of representation, John discussed his new role at Proud Embankment.

The performer will be leading a cast of world-class cabaret, circus and burlesque superstars in an extraordinary action-packed show.

Speaking of his involvement, he spilled: “At Proud, there is something for everybody there.

“We are all beautiful colours of humanity on stage. It is applauded and respected and that is also a beautiful thing.”

You can catch John’s final show in London on November 19.