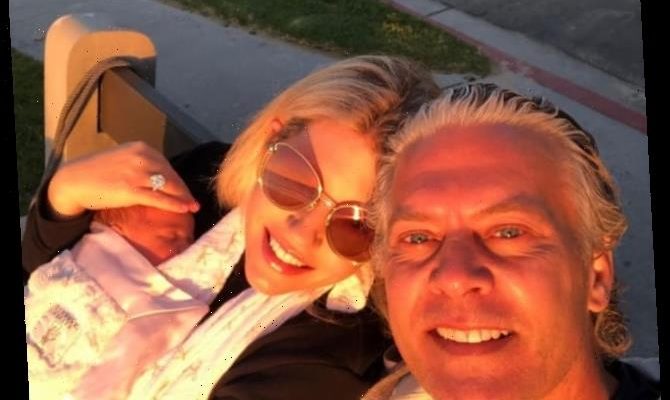 In July of last year, David Beador and Lesley Ann Cook announced that they were expecting their first child together.

Both were already parents from previous relationships, and three months later, the two were married.

On Friday, they shared that their daughter was due in one week.

But surprise! The very next day, they shared their newborn with the world.

Plenty of pregnant people would spend their final days of pregnancy in bed.

Not Lesley! She and David got all dressed up for this impressive photo shoot featuring the beach and her baby bump.

At the time of Lesley sharing the pic, they didn’t expect to meet their daughter for another week.

But on Saturday, February 6, Lesley and David had a major update for fans and followers.

“Our first sunset with our sweet little Anna,” Lesley captioned a photo of her and David with their newborn.

Lesley added: “(Pronounced Ah-na)” We hope that little Ah-na enjoys correcting people, because with that spelling/pronunciation combo, she’ll be doing that for the rest of her life.

David and Lesley were married in October.

We have to say that — as critical as we have been of David in the past for his behavior before and during the divorce — the matching “wedding masks” rock.

There has been so much pointlessly defiant nonsense during the COVID-19 pandemic. It’s nice to see people just go “we’ll just go to the courthouse in custom masks.”

Lesley actually had one of the best pregnancy announcements that we’ve ever seen.

She showed fans a literal photo of a bun in an oven.

What can I say? I like puns. It’s a cute way of sharing the news with followers.

David and Lesley began their relationship a short time after David’s and Shannon went their separate ways.

This has led to some public shading between Lesley and Shannon.

However, it appears that either people are happier now and have moved on … or they’re keeping their scathing comments off of Instagram.

As we mentioned, David and Lesley are both parents from prior relationships — with David’s three daughters with Shannon being very familiar to RHOC viewers.

Lesley has previously raved about David’s many qualities as a father.

In particular, she singled out the ways in which he supports his daughters and makes an effort to show up for their events and, to the younger ones, provide transportation as needed.

Lesley and David were dogged by engagement rumors for what seemed like ages.

Ultimately, they became engaged to one another in January of 2020.

Obviously, 2020 was not an ideal year for an engagement, a marriage, a relationship, or even remaining conscious as a human being … but there’s nothing that anyone can do about that.

We’re sure that a quick pandemic marriage while already expecting their child together was not what either of them had in mind.

But that’s life, and these two have enough lived experience between them to know that.

Congratulations are in order for the birth of their precious baby girl!